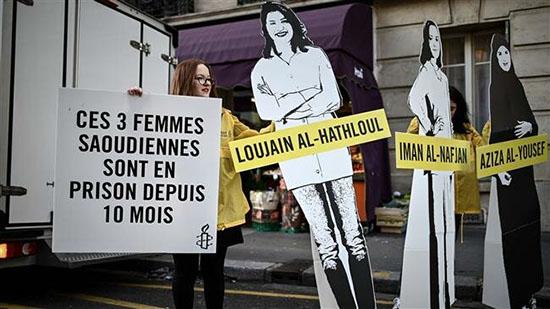 Amnesty International has released a report marking the first year since the Saudi regime launched a campaign of suppression against women’s rights activists, detailing how the kingdom indulged in arrests and torture of activists as well as mass executions in “the year of shame.”

“Today marks the first anniversary of the arrests of several prominent women human rights defenders in Saudi Arabia, after a shameful year for human rights in the Kingdom in which activists, journalists, academics, and writers were targeted,” the rights-group said in a reporton Tuesday.

Ironically, the arrest of female activists followed a widely-hyped decision by Crown Prince Mohammed bin Salman to lift a ban on women’s driving. Among those detained were some of the proponents of the ban’s removal.

The arrest of some of the kingdom’s “bravest women activists” came while the kingdom should have instead “celebrated hand in hand steps that should have served to advance the rights of women in the country,” said Amnesty’s Middle East Research Director, Lynn Maalouf.

The report named some of the arrestees as Loujain al-Hathloul, Iman al-Nafjan, Aziza al-Yousef, whom it called Saudi Arabia’s “leading women’s rights campaigners,” adding that al-Hathloul was still in custody alongside several other female activists.

“Then they went on to detain those who still dared to stand up for these women, advocate for women’s rights in the country, or even express any questioning of the authorities’ policies,” it added.

In April, the kingdom stepped up its clampdown on critics, arbitrarily detaining over a dozen journalists, writers, academics and family members of women’s rights defenders.

“Women activists also detailed accounts of their torture, ill-treatment, and sexual abuse to the court, and many of them now face a prison term for their peaceful activism and speech,” Maalouf said.

The previous year also saw escalation of the kingdom’s crackdown on dissent.

Citing the escalation, the report said the Public Prosecution had called for the execution of religious clerics and Shia activists on trial before the country’s “counter-terrorism” court “for charges related to exercising their peaceful rights to freedom of expression, association, and assembly. “

In late April, the authorities carried out a mass execution of 37 men, the majority of them from Saudi Arabia’s Shia minority, after unfair trials, the body said.

At least 15 men executed last month were sentenced to death based on “confessions” they said were extracted through torture, including a young man who was convicted of a crime that allegedly took place while he was under the age of 18.

So far this year, the Saudi authorities have executed at least 110 people.

Saudi Arabia has controversially widened the scope of its so-called counter-terrorism law to include opposition to the kingdom’s policies at home and abroad and its treatment of its Shia population.

The kingdom, which is dominated by Wahhabism, an exceptionally-intolerant ideology, is accused of exercising radically-discriminatory policies against its Shia minority. In early 2016, it notoriously executed the country’s leading Shia cleric, Sheikh Nimr al-Nimr.

The kingdom’s Shia-populated Eastern Province is under tight security control and has witnessed prolonged “security” raids, including wholesale demolitions and intermittent bloodshed.

Malouf said, “This is also a shameful day for Saudi Arabia’s closest allies in the West, namely the USA, the UK and France. Instead of prioritizing business deals and arms sales, they should be intransigent – and publicly so – in pressuring the Saudi Arabian authorities for the immediate and unconditional release of all individuals who are being punished for expressing their views peacefully.”

The Western trio has never allowed the kingdom’s rights record to come in the way of their trade and monumental arms deals.