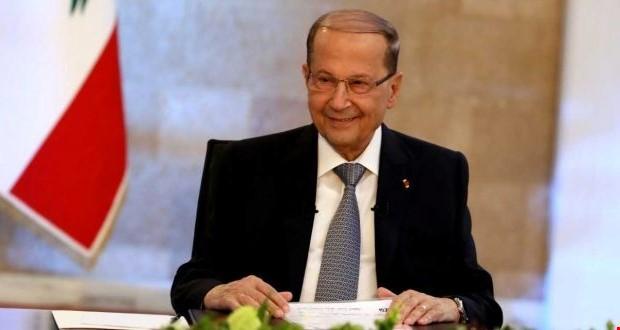 President Michel Aoun on Tuesday reassured that the Lebanese lira is “not in danger.”

“The Lebanese lira is fine and not in danger and the difficulty we are going through is temporary and limited,” Aoun said in a speech at the annual iftar banquet in Baabda.

“Several decisive steps have been made on the path of eradicating corruption from Lebanon,” the president said.

He added: “Lebanon is going through a difficult economic, financial and social crisis, but it is temporary and we are capable of overcoming it if we cooperate in the rescue process.”

“We must accept the sacrifices and stop the sit-ins, strikes and demonstrations that paralyze the public and private sectors,” Aoun went on to say.

Lebanon is set to impose austerity measures to combat its bulging fiscal deficit. It is one of the world’s most indebted countries, with public debt estimated at 141 percent of gross domestic product in 2018, according to credit ratings agency Moody’s.

The budget for 2019 has yet to be finalized, but thousands of Lebanese public employees went on strike last week amid fears that their salaries and benefits would be cut as part of strict austerity measures to reduce a ballooning budget deficit and massive national debt. They included employees at Banque du Liban, Beirut’s port, the Social National Security Fund and the main state-run landline telephone company.

Retired servicemen have also staged a series of protests across Lebanon.