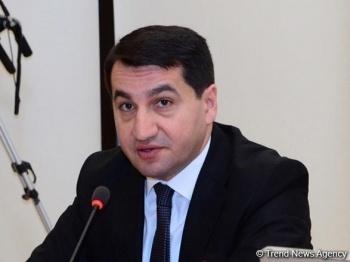 “The meeting was held as part of the event dedicated to the 10th anniversary of the EU Eastern Partnership initiative,” he said.

As for Pashinyan’s statement, Hajiyev said that the main reason for the unresolved Armenia-Azerbaijan Nagorno-Karabakh conflict is Armenia’s aggressive policy.

“After Armenia stops to occupy Azerbaijani territories, progress in the conflict settlement and ensuring peace in the region may be achieved,” he said. “As for the format of the negotiation process, there are two parties to the conflict, namely, Armenia and Azerbaijan, and the negotiations are being held in this format.”