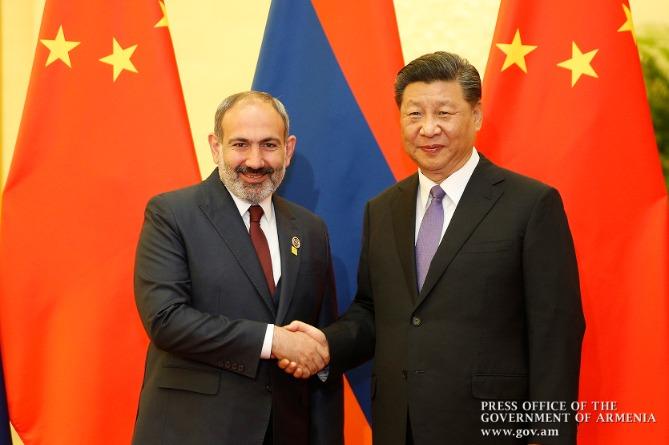 YEREVAN, May 15. /ARKA/. On a working visit to the People’s Republic of China, Armenian Prime Minister Nikol Pashinyan met with President Xi Jinping at the House of People’s Representatives.

After a protocol handshake and a video-photo session, the leaders of the two countries discussed a broad range of issues on the agenda of Armenian-Chinese relations, the Armenian government press office said. It said President Xi Jinping thanked Nikol Pashinyan for accepting his invitation to participate in the Dialogue of Asian Civilizations conference. Xi Jinping expressed his country’s interest in the continued development of multifaceted relations with Armenia. The President of the PRC spoke about the deeply-rooted Armenian-Chinese cultural and historical ties, noting that this was also due to the Silk Road, among other factors.

“We know the Armenian people very well; we know Aram Khachatryan, Artem Mikoyan and Hovhannes Tumanyan. We share a common goal of cooperation between different civilizations. We are well aware of Armenia’s history. We are convinced that the tragic events of the past should be ruled out in the future,” he said. Xi Jinping assured of China’s readiness to participate in the construction of the North-South Highway and other infrastructure-related projects.

The PRC President advised that several Armenian producers have recently participated in different exhibitions in China and are successfully represented on the Chinese market. Xi Jinping expressed confidence that bilateral cooperation will develop in trade, industry, transport, culture and in the humanitarian sphere. He added that his country will continue to support such projects as may contribute to Armenia’s development and enhance the welfare of the Armenian people.

Prime Minister Pashinyan thanked Xi Jinping for inviting him to the Dialogue of Asian Civilizations conference and for the possibility of a private meeting, which is a good opportunity to discuss the prospects of bilateral cooperation.

“Relations with the PRC are among Armenia’s foreign policy priorities. Our two nations represent ancient civilizations; Armenian manuscripts keep records of mutual contacts dating as far back as to the 5th century. We were engaged in commercial, humanitarian and political exchanges. It is extremely important for us to maintain constructive and productive relationships with China,” Nikol Pashinyan said.

Noting that he was very much impressed by China’s recent achievements, the head of the Armenian government congratulated Xi Jinping on the 70th anniversary of the People’s Republic of China. Nikol Pashinyan said Armenia is prepared to implement joint projects with China in the framework of the One Belt – One Way initiative. In this connection, he pointed out that the Armenian side looks forward to participating in joint projects in the spheres of transport, railway communications and information infrastructures.

Taking the opportunity, Nikol Pashinyan gave details of Armenia’s recent developments, stressing that today our country is a dynamically developing state, strong with political stability and predictability. During the meeting, which went off in a friendly atmosphere of mutual trust, the two heads of state exchanged views over the prospects of Armenian-Chinese relations, as well as on a number of issues of mutual interest relating to international and regional policies.

The interlocutors considered prospective cooperation in the spheres of agriculture, transport, energy, information technology, infrastructure, education, etc. The parties agreed to discuss further action at the level of the ministries.

Coming to the Nagorno-Karabakh conflict, both sides noted that the problem should be settled through dialogue.