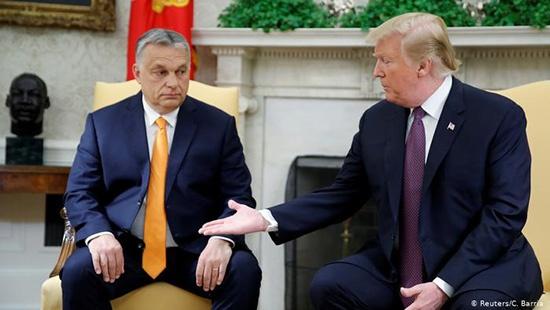 During his visit to the White House, Hungary’s prime minister received a lot of compliments. But the US president’s positive opinion of Orban is not shared by his administration, comments Keno Verseck.

No other EU head of government has courted US President Donald Trump like Hungarian Prime Minister Viktor Orban. During Trump’s election campaign, Orban openly sided with the US billionaire. And he was one of the first EU heads of government to congratulate him, almost euphorically, on his election in November 2016. Since then he has repeatedly highlighted his similarities with Trump, be it on the issue of migration, or the fact that both are fighting the establishment and “political correctness.”

In fact, hardly any European politician is as close to Trump as Orban. Still, Hungary’s prime minister had to wait two and a half years for a bilateral meeting with the US president. On Monday that day had arrived and Trump received Orban at the White House for just over an hour. The timing of the meeting was almost a humiliation. With the exception of Bulgaria, Trump has already received or visited all other eastern European EU member heads of state or government. Hungary’s prime minister had to settle for last place.

Words of praise and some conflicts of interest

Then again, Orban got to hear a cascade of praise from the US president. Trump said it was a great honor to receive Orban, that the Hungarian prime minister was doing a “good job,” that he has kept his country safe and was therefore “highly respected throughout Europe.” “Probably, like me, a little bit controversial, but that’s okay. That’s okay,” the president said.

Trump would probably have met Orban much sooner if it had been merely a matter of personal sympathy — he has a soft spot for authoritarian leaders. But it is not only the Democrats, Trump’s opponents, who are hostile to Orban. Trump’s government and his Republicans party are also divided about Hungary’s prime minister. This can be seen in the fact that prominent Hungarian opposition politician Peter Marki-Zay was received at the US State Department on the same day. There are also considerable conflicts of interest between the US and Hungary.

Many Republicans have an extremely critical view of Hungary’s anti-democratic transformation since 2010, under Orban. Hungary’s quasi expulsion of the Central European University, founded by stock market billionaire George Soros, is widely perceived in Washington as an attack on a US institution. Hungary’s rapprochement with Russia and China and its economic cooperation with both major powers run counter to the interests of the US. In recent years, Hungary and the US have had occasional disagreements, for example at the end of 2018 when Hungary handed over two Russian arms dealers, wanted by the US, to Russia. Another issue has been Hungary’s blocking of any cooperation between NATO and the Ukraine as a reaction to Ukraine’s law on languages, which affects the rights of the Hungarian-speaking minority in Ukraine.

Is Hungary going to buy more US weapons?

Despite this, Trump’s government seems determined to make a fresh start with Hungary. Unlike under Obama, the current US administration is guided by a principle that foreign policy experts and geopoliticians refer to as “transactional diplomacy.” In Orban’s case this could mean that Hungary is going to buy US weapons worth hundreds of millions or even billions of dollars.

However, the bottom line of the meeting between Trump and Orban is something different: In Hungary, Orban governs almost without restrictions. He has seriously damaged his country’s democracy for many years, if not decades to come. America’s democracy, on the other hand, seems to be able to withstand even a president like Trump. He may dream of achieving Orban’s hold on power and unrestricted domestic political options. But he won’t get them.