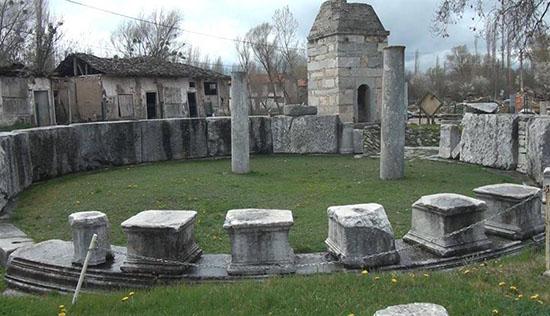 Interest in the world’s first stock exchange building in the western province of Kütahya’s Çavdarhisar district is increasing every day, but to many the historical site is still unknown.

Professor Elif Özer, head of excavations in the region for many years, says that the first stock exchange building in the Macellum area in the Roman-era ancient city of Aizanoi should be better promoted so that it’s recognizable to people around the world.

Özer has suggested ringing the opening bell of the stock exchange in Macellum just as the bell rings at the Istanbul, Tokyo or New York stock exchanges. The daily ritual would help promote the ancient site to the world, she said.

“In this way, it makes great contributions to the ancient city of Aizanoi and the improvement of tourism in Kütahya. And we can find sponsors for our excavations there,” she said.

The Macellum area is known as the world’s first stock exchange because the term appeared in 304 A.D. after the Emperor Diocletianus issued a decree setting a ceiling price and sent this decree to many cities in the empire to combat inflation, Özer said.

“At that time, a round talus was made in the meat and fish market of Macellum, and all of the decrees were carved in inscriptions there. There were these inscriptions in other places, but Aizanoi was the only place where all of them existed. This is very important,” she said.

Aizanoi is known as the second Ephesus thanks to its 20,000-person-capacity amphitheater, 13,500-person-capacity stadium, a bath, a street with pillars, a necropolis as well as the world’s first stock exchange.

The name “Aizanoi” comes from the mythological hero “Azan.” The city is believed to date back to 3,000 B.C. During the Hellenistic era, Aizanoi was periodically seized by the Pergamon Kingdom and Bithynia. The city later fell under Roman rule but gradually declined in importance in the early Byzantine era.

Aizanoi lost its importance around the seventh century. The flat area around the Temple of Zeus was transformed into a fortress in the Middle Ages and used as a base by the Çavdar Tatars in the 13th century. This is why the area was named Çavdarhisar.

Later, Aizanoi, where the Roman emperor Diocletianus announced the prices of goods on inscriptions with the aim of combating inflation, began hosting the world’s first stockexchange.

The decree of the official fixed prices, determined by Emperor Diocletian, are located in the round building, which was unearthed after an earthquake in 1970. This decree shows the prices of some 1,500 main items used in the trade of the fourth century. It is estimated that these decisions were equal to today’s stability packages, which are made after an economic depression.