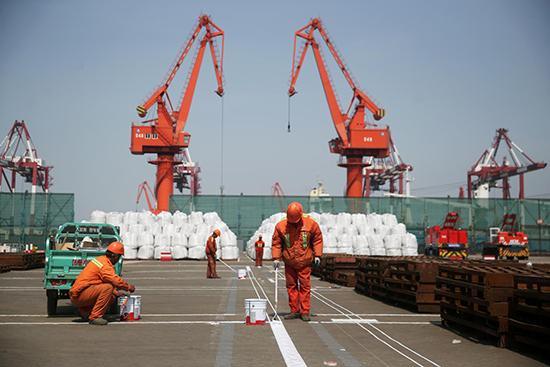 SINGAPORE/BEIJING (Reuters) – A tanker carrying Iranian fuel oil in violation of U.S. sanctions has unloaded the cargo into storage tanks near the Chinese city of Zhoushan, according to ship tracking data on Refinitiv Eikon.

The discharging of the nearly 130,000 tonnes of Iranian fuel oil onboard the tanker, the Marshal Z, confirmed by a representative of the oil storage terminal, marks the end of an odyssey for the cargo that began four months ago.

Reuters reported on March 20 that some Iranian fuel oil had managed to evade the United States’ sanctions on petroleum exports by using ship-to-ship transfers involving four different ships, including the Marshal Z, and by using forged documents that masked the cargoes as originating from Iraq.

A second representative from the terminal operator, Zhoushan Jinrun Petroleum Transfer Co, said the cargo could not be Iranian oil, as the terminal had not received official shipments from Iran in at least the past four years. Both Jinrun representatives declined to be identified because of the sensitivity of the matter.

The unloading of the fuel oil comes less than two weeks after U.S. President Donald Trump’s administration stepped up moves to choke off Iran’s oil exports by scrapping waivers it had granted to big buyers of the country’s crude oil including China.

Refined products like fuel oil, mainly used to power ship engines and generate electricity, were not covered by the temporary waivers granted on the sanctions reintroduced in November 2018 as Washington seeks to pressure Iran into abandoning its nuclear and missile programs.

Reuters followed the movements of the Marshal Z since January using ship-tracking data available daily except when the ship was in deep waters and out of range of satellites.

From March 22 until arriving at the Jinrun terminal on the island of Liuheng on May 8, the vessel maintained a constant draught – how deep the ship sits in the water – of 15.9 meters (52 feet), according to the tracking data. That indicated the cargo was not discharged before reaching the terminal, about 30 km (18 miles) south of Zhoushan, near Shanghai.

Jinrun, owned by Herun Group, offers bonded storage at the terminal, according to its website, meaning that fuel can be stored there without clearing Chinese customs and officially entering the country. Herun officials referred questions back to Jinrun.

On May 12, the ship finished unloading the fuel oil as indicated by a change in its draught to 9 meters, and left the terminal, the tracking data showed. The vessel is headed for the waters just outside Singapore, set to arrive on May 21, the data showed.

FROM MALAYSIA TO CHINA

The Marshal Z took on the cargo from a larger tanker off the coast of the United Arab Emirates in January. It transferred the fuel oil to a second tanker, the Libya, off the Malaysian port of Malacca later that month, the ship-tracking data showed.

But potential buyers wary of the U.S. sanctions steered clear of the Marshal Z’s cargo. By March 22, the Marshal Z took the fuel oil back from the Libya and anchored off the Malaysian and Singaporean coasts.

The vessel lingered off Singapore and Malaysia in March and April, the ship tracking data shows, before sailing to Hong Kong and finally to Liuheng island, off the eastern Chinese province of Zhejiang.

“Transparency has been the thorn in the Marshal Z’s hull for quite some time now and owing to the issues regarding the alleged origin of her cargo nobody has been able to touch it,” said Matt Stanley, an oil broker at StarFuels in Dubai.

Reuters was unable to determine the financial terms surrounding the cargo’s unloading, but industry participants said it would likely have been on offer at a lower price to ensure a sale.

“Somebody in China decided that the steep discount this cargo most likely availed … was a bargain too good to miss,” said StarFuels broker Stanley.

Reuters was unable to confirm who purchased the fuel oil cargo carried by the Marshal Z.

Reuters has not been able to determine the owners of the Marshal Z. According to a shipbroker report dated Jan. 28, the tanker was sold to an undisclosed buyer and intended for use as floating storage.

Reporting by Roslan Khasawneh in SINGAPORE and Muyu Xu in BEIJING; Additional reporting by Beijing newsroom; Editing by Christian Schmollinger and Kenneth Maxwell