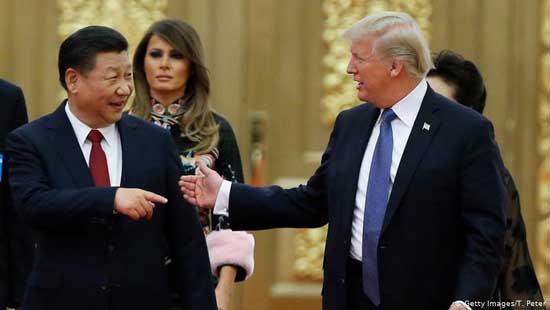 Chinese exports to the US have been subject to the Trump tariffs since last July. According to the US President, this is wrecking the Chinese economy but does the Asian power ultimately have more stomach for this fight?

Growth in the Chinese economy has been slowing steadily for much of the last decade. From a rate of 12% annual GDP growth in 2010, the figure is now little more than half that.

Last year, the Chinese economy grew by 6.6%. A rate like that would be cause for huge celebration in practically every major western economy, but it was actually the slowest year of growth China has experienced since 1990.

2018 was also the year in which US President Donald Trump started slapping tariffs on Chinese imports, a practice which he continued in recent days with a fresh wave of levies. A crude calculation might directly connect that fact with China’s 29-year low growth rate. But is it as simple as that?

“I think the slowdown is probably 50% due to the trade war and 50% due to the hit to credit from the crackdown on shadow banking, which has hurt the credit channel to the private sector,” Allan von Mehren, Chief Analyst with Danske Bank, told DW.

He believes the biggest impact the tariffs have had on the Chinese economy over the last year has been the uncertainty they have prompted and the subsequent damage to business sentiment. “It has given a hit to consumer spending and private investments, not least in the export sector,” he said.

Chinese economic data released on Wednesday was not encouraging. China retail sales growth (year-on-year) slipped to its weakest reading since 2003, confirming von Mehren’s assertion that consumers are cutting back.

Another sign of trouble came from the country’s industrial production data. Growth there slipped significantly in April, falling sharply from the March figures.

Yet overall, the economic data suggests there is little direct damage to the Chinese economy from Trump’s tariffs, beyond the aforementioned impact on sentiment, which has affected investment as well as consumer spending.

According to van Mehren, that impact has been broad-based but one exception is in the construction sector, where government stimulus packages have helped keep home sales robust.

Muddling through with stimulus packages

The Chinese government itself has acknowledged the impact the trade conflict with the United States is having on the economy, though. In March, the government revised its 2019 growth rate target to between 6% and 6.5%, with Li Keqiang, the Chinese Prime Minister, citing “profound change in our external environment,” a clear reference to the ongoing trade issues with the US.

Since July, when the US tariffs started to come into full effect, Beijing has adopted fiscal stimulus measures aimed at boosting investment and spending.

As well as that, the government has tried to improve access to credit for the private sector, in the face of the crackdown on the so-called shadow banking system, an industry of unregulated lending which operates outside of the regular banking system.

The fact that the economy continues to cool in the face of such measures hints at the significant challenges Trump has presented the world’s second largest economy.

Another risk, according to van Mehren, is that some manufacturing companies will switch production from China to other Asian countries, such as Vietnam. “This is very hard to quantify, but anecdotal evidence suggests it is happening,” he said.

Who pays the tariff?

It started with solar panels. Then it was steel and aluminum. Now, practically all the $476 billion worth of goods China exports to the US annually (see graphic above) are subject to some kind of tariff, ranging in scale from 10% up.

Even at a higher cost, American firms and businesses are still choosing to buy Chinese in copious volumes. That may partly explain why Trump has sought to increase the pressure on China in recent weeks, his latest move to declare telecommunications equipment made by “foreign adversaries” — a clear nod to Huawei — a national emergency.

According to van Mehren though, China is able to deal with an escalation of trade hostilities.

“I don’t think a resolution is urgent for China and they will not give any extra concessions due to the increased pressure,” he said. “I think they are preparing for a long trade war now and believe they have more endurance.”

While he does believe that the need for government stimulus packages has delayed some longer-term Chinese objectives such as the transitioning away from state-owned enterprises and infrastructure projects, he says the trade conflict is in many ways a “strategic gift” for China, in that it has hammered home the need for certain economic reforms in the country.

“What matters the most for Chinese outlook are reforms, education and investment in upgrading production,” he says. “As long as China shows a commitment to this, I believe the outlook is still broadly positive.”

Yet, there is a deeper concern arising from the trade conflict, he says, away from the pure economics, and that’s the overall deterioration in Sino-US relations.

“The anti-Chinese sentiment in the US seems to be rising fast and I fear that the US will start challenging China on all fronts,” he says.

Should that mean some form of military conflict, whether over Taiwan or South Chinese Sea territorial issues, the current trade conflict might feel rather tame in comparison.