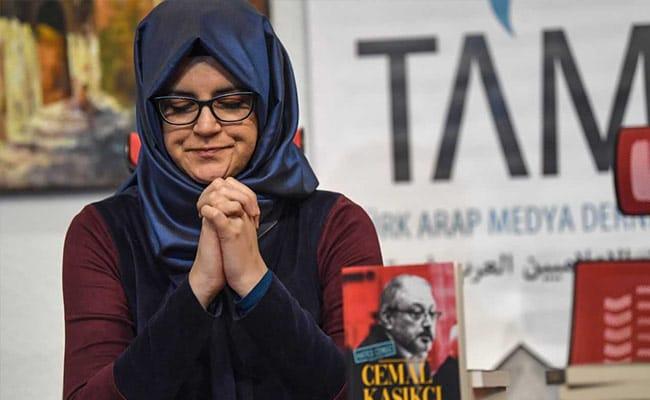 She said The Post contributing columnist, who always championed the United States, “would have been most disappointed of all to see the U.S. response.”

The fiancee of slain Saudi journalist Jamal Khashoggi criticized the U.S. response to his killing on Wednesday, saying that the Trump administration has failed to uphold American values by allowing the Saudi government to avoid meaningful consequences for the crime.

Khashoggi “had always championed the U.S.” as ” the place you went “to challenge the status quo and speak truth to power,” Hatice Cengiz said in a meeting Wednesday with Washington Post journalists. “Jamal would have been most disappointed of all to see the U.S. response.”

Cengiz’s remarks are her strongest statement to date on the Trump administration’s muted reaction to a killing that was widely condemned as an attack on press freedoms and a brazen violation of human rights.

Cengiz, who is scheduled to testify before a House subcommittee Thursday, also said that the Saudi government has not contacted her to offer compensation or even condolences since Khashoggi was killed in the kingdom’s consulate in Istanbul last October. By contrast, the kingdom has given millions of dollars in cash and property to Khashoggi’s four adult children.

Cengiz was the last person to see Khashoggi before he entered the consulate to obtain papers for their planned marriage. He never emerged from the building, where according to U.S. and Turkish authorities he was killed and dismembered by a team of assassins dispatched from Riyadh.

She also described an alarming conversation with Turkish President Recep Tayyip Erdogan after Khashoggi’s death, in which the Turkish leader cautioned about the danger posed by Saudi Arabia under the volatile crown prince.

“What we are faced with now is not a normal country, not a normal leader,” Erdogan said, according to Cengiz. He added that Mohammed is “someone who tends to behave erratically.”

The White House and the Saudi Embassy in Washington did not respond to requests for comment.

Turkey and Saudi Arabia are rivals, and Erdogan’s government reacted with anger to the kingdom’s apparent belief that it could kill one of its citizens with impunity on Turkish soil.

A Turkish intelligence recording shared with the CIA included audio of a struggle inside the consulate and Khashoggi gasping for air. Turkish surveillance footage also showed Saudi operatives clumsily trying to cover their tracks in Istanbul, and it helped to disprove Saudi claims that Khashoggi had left the consulate unharmed.

Saudi officials have denied that Mohammed was involved in or even aware of the operation to kill Khashoggi, insisting that it was carried out by rogue elements of the government. Saudi authorities have announced investigations of 21 people in connection with the killing, and prosecutors are seeking the death penalty for five operatives directly involved.

Cengiz said she had met Khashoggi at a conference last year and that the two soon made plans to wed. She said that he sometimes voiced concerns that Saudi Arabia would retaliate for columns he wrote that were critical of the government by seizing his passport or other means but that he did not fear for his safety.

She said she accompanied him to the consulate of her own accord that day, and that while he left belongings including a phone with her outside, he did not express any concern that he might be abducted or take any precautions such as leaving her with instructions on whom to call.

Cengiz said she had considered relocating to the United States after Khashoggi’s disappearance but opted to settle in London, where she now lives and is pursuing a doctoral degree, in part because the “U.S. is going through a difficult political time.”

She said that Saudi Arabia has continued to impede the search for answers to lingering questions, including the whereabouts of Khashoggi’s remains. Based on conversations with Turkish officials, she said, “I know for a fact they have not found anything.”

As a result, she said, she still clings to a small hope that Khashoggi might be alive. “If someone came up to me and said he is alive, I would believe it,” she said.

The Washington Post’s Shane Harris contributed to this report.