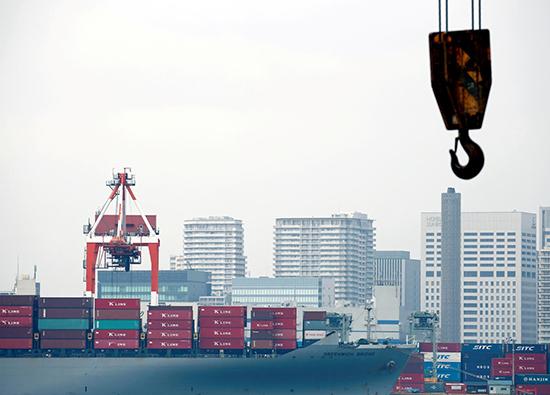 TOKYO (Reuters) – Japan’s government is considering downgrading its assessment of the economy next week as the intensifying Sino-U.S. trade war takes a toll on exports and factory output, a government source with direct knowledge of the matter told Reuters on Thursday.

A downgrade in the crucial monthly report could fuel speculation that Prime Minister Shinzo Abe may delay once again a planned sales tax increase set for October.

Speculation is swirling that Abe may delay the tax hike to 10% and call a snap election for parliament’s lower house to coincide with an upper house poll this summer, at a time when his “Abenomics” reflationary policy is sputtering.

Abe has delayed the planned hike twice as he prioritized economic growth over fiscal reforms. A previous tax increase to 8 percent from 5 percent in April 2014 hit consumers hard and triggered a sharp slump in the world’s third-largest economy.

But, asked if a decision to delay would need to be made before an upper house election this summer, Hagiuda said: “Of course.”

“We should take a good look” at the Bank of Japan’s ‘tankan’ business survey due on July 1 as well as various other indicators, Hagiuda said in an interview.

Hagiuda said it would be best if the tax hike went ahead but said doing so if the economy was in danger of deteriorating would be “to mistake the means for the end”.

The government has announced measures to cushion the impact of the move on consumers, and Abe has repeatedly pledged to proceed with the increase barring a huge economic shock. But Bagiuda said even the risk of such a shock could be reason for delay.

“If we think that there is sufficient omen (of a big blow), it would not be strange to make a decision then,” he said.

In its report in April, the government said Japan’s economy was recovering gradually, despite signs of weakness in exports and output. It cut its economic assessment for the first time in three years in March.

Investors are closely watching whether the government will cut the economic outlook and if the word “recovery” remains in the report for May, especially after a fresh escalation in the U.S.-China trade war last week which saw both sides hike tariffs on each others’ goods.

Both the U.S. and China also released data on Wednesday pointing to slowdowns in their economic growth.

On Monday, Japan is expected to report a mild economic contraction in first quarter gross domestic product (GDP), according to analysts polled by Reuters.

The economy may already be in recession, a government assessment of its own economic indicators showed early this week.

The trade war is prompting the government to review its earlier view that exports and factory output would bottom out later this year, the source told Reuters on condition of anonymity because he is not authorized to speak to media.

The government is considering cutting its assessment of capital expenditure and factory output in the May report.

“Capital expenditure is likely to have deteriorated, and net exports may have improved as imports probably fell faster than shipments, which were not necessarily a good thing. As such, Q1 GDP will likely turn out poorly,” the source added.

Were Abe to call a snap lower house election, he would want to seek a mandate for a major policy, such as his push to revise the pacifist, post-war constitution to clarify the ambiguous status of Japan’s military, Hagiuda said.