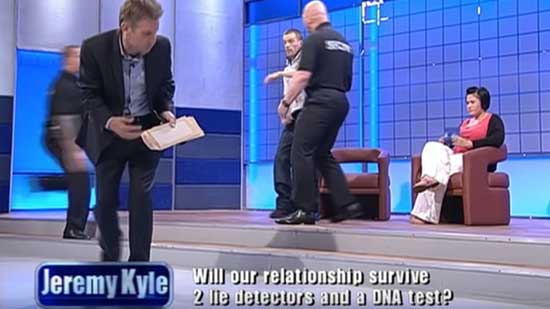 The cancellation of The Jeremy Kyle Show is a typical British middle-class moral panic that treats working-class people as children – too stupid to even be allowed to participate in (or watch!) a daytime TV program.

Having looked down on what is a parochial watered-down Jerry Springer Show clone for its entire 14 year run, this week the UK’s officials and cultural elite got their chance to concoct a fatal media storm.

After over 3,000 shows and what must be well over 10,000 guests who aired their family feuds, questionable paternities and definite drug addictions in public, a 63-year-old man, Steve Dymond, committed suicide shortly after appearing on the program, where he failed a lie detector test when grilled about cheating on his fiancee.

Apart from the statistically surprising fact that such an incident has happened only now, it is quite distasteful to see Dymond’s suicide used as a pawn to push an agenda.

As all those blaming the show for insensitively handling mental health issues must themselves know, suicide is rarely a single-factor issue, and frequently the victim is not thinking clearly in their final days. “TV show made innocent man kill himself” is ironically the same kind of simplistic, finger-pointing approach to complex situations that Kyle himself stands accused of.

And even if it was somehow possible to definitively prove that his appearance on the show pushed Dymond over the edge, it doesn’t actually make his death Kyle’s fault. Otherwise, we’d have to jail every person blamed in every parting note.

So without the coercion-to-death charge what we are left with is a more generalized accusation of exploitation and humiliation of the featured guests – who are predominantly working-class – for the sake of entertainment.

Allow me to let you in on a secret that the experienced media personalities piling in on Jeremy Kyle know as well as I do: all non-professional participation on TV is a form of exploitation by the content makers, and can lead to potential humiliation. And it’s all for your entertainment.

When you agree to appear in anything from a soundbite to a lifelong documentary you become a tool in the hands of those who write, film and edit the program.

This is true for talk shows, game shows with inept contestants, political discussion programs, singing contests where you can hit the wrong note, children’s TV, humor panels featuring jokes that fall flat, local station reports, reality TV where you agree to live in a video-surveilled house with strangers, or let someone cohabit with your wife, and even those shows where you get to bid on antiques or talk about your family history. They all use you, and any can result in a YouTube clip that will haunt you – or worse.

In most cases the people involved are aware of this, and see it as a quid-pro-quo arrangement: I will give you my time, myself even, in exchange for money, local (or global) fame, or even a chance to state my political views.

What critics of the Jeremy Kyle Show are claiming is that its participants are too stupid to have made that calculation. Uniquely, they should have been barred from television for their own good, despite voluntarily choosing to take part.

Is this view based on a thorough behind-the-scenes look at the screening of the applicants for the show, the quality of mental healthcare they received from its four dedicated staff, their behavior before and after?

Or is this just a snobbish disgust from people who would be embarrassed to be caught even watching a single broadcast, saying “Oh these common people with their tawdry lives washing their laundry in public, they must be getting roped into it.”

It appears to be the latter. Because the critics aren’t just worried about participants, they think the entire enterprise is a social harm – throughout the commentary shines through a vicarious desire to save the poor even from watching something that sets its sights so low, and possibly even corrupts them (does real life corrupt?).

Now I agree that the Jeremy Kyle Show is not aspirational, nor does it rank high on the educational totem pole of public broadcasting.

But unless they plan to set up a commission that will give counselling to each person who appears on TV – every aspiring pop star, every teenager talking about his exam results –  bourgeois tastemakers are just expressing patronizing prejudice dressed up as concern.

And they should not have forced shut a show that was watched by millions on vague moral grounds, particularly as it became a quaint relic in a post-YouTube world where far more genuinely disturbing content is available in one search request.

Igor Ogorodnev is a Russian-British journalist, who has worked at RT since 2007 as a correspondent, editor and writer