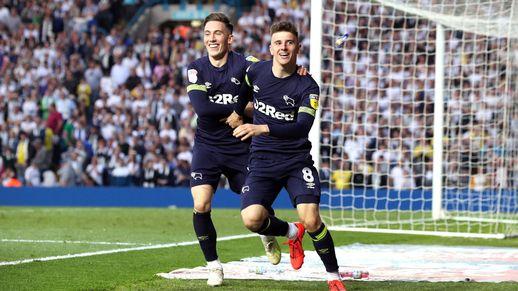 Sporting Life · Columnist
Derby will face Aston Villa in the Sky Bet Championship play-off final after coming back to beat Leeds 4-3 on aggregate.

Trailing 1-0 from Saturday’s first leg at Pride Park, the Rams fell behind early on to a Stuart Dallas goal (24), but Jack Marriott (45), Mason Mount (46) and a Harry Wilson penalty (58) put them ahead in the tie.

Dallas then grabbed another to level proceedings (62) but Gaetano Berardi’s late sending off handed the ascendancy back to Derby, and Marriott clipped in the late winner (85) to secure a 4-3 aggregate win.

Frank Lampard’s side will now go on to face Aston Villa – who beat West Brom on penalties on Tuesday night – in the final on Monday, May 27. Although the one negative from their night was Scott Malone’s late red card that will see him miss that game at Wembley.

Derby boss Lampard was keen to stress the play-off job was not yet complete.

“The players have done it,” he told Sky Sports.

“The work rate through the year… (but) we’re not there yet. I’m a bit worried because I watched Villa do this last night, but the players deserve a moment.

“There’s work to do. This isn’t the end of the celebration. We’re underdogs again. We’ll have a tough game at Wembley against a brilliant Villa team, but we’re there.

“We changed the system, we made a little tweak, and it worked brilliantly.

“It was tough (to watch) but beautiful in the end. They’re a top-quality team and you’ve got to be nervous to the end because this means so much to so many people.”

Lampard added that he had a feeling Marriott could play a key role from the bench.

“That’s what Jack needs to do. He needs to work on the ball and off the ball and he can be a top-class striker. I’m delighted for him.

“I felt it was his night. I felt there was something coming from him, in whatever way. I didn’t realise it would be that!

“It’s amazing. I think he’s banging the door down (to start at Wembley).”

“We should have made a bigger difference in the first half,” he told Sky Sports.

“The second half was an unpredictable one and it’s difficult to analyse it.

“We conceded in the first half and the opponent was dangerous.

“And in the second half the game was unbalanced and they found the spaces that usually they didn’t find.”

But he was reluctant to criticise referee Anthony Taylor for the decision.

“There are clear things that you can see but I don’t want to mention the conditions in which Gaetano was sent off,” he added.

“I don’t like to put the referee as responsible.”