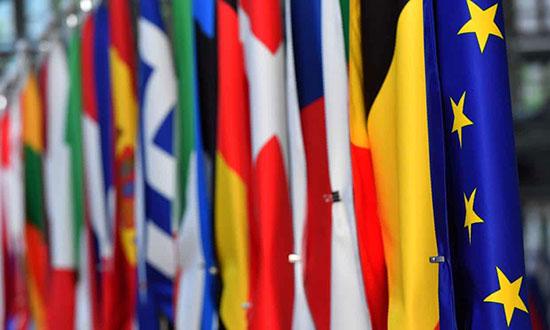 Three in 10 think conflict among EU countries is a realistic possibility, survey finds

Daniel Boffey in Brussels –  The Guardian

European flags in Brussels. Two-thirds of Europeans have positive feelings towards the EU, according to the Eurobarometer. Photograph: Emmanuel Dunand/AFP/Getty Images

More than half of Europeans believe the EU is likely to collapse within a generation, despite support for the bloc hitting heights not recorded in more than a quarter of a century.

In France, Germany, Belgium, Italy, the Netherlands, Austria, Slovakia, Romania, Greece, the Czech Republic and Poland, a majority of people surveyed thought EU disintegration was a “realistic possibility” in the next 10 to 20 years.

According to the survey, commissioned by the European Council on Foreign Relations (ECFR) thinktank, 58% of people in France believe the EU is very likely or fairly likely to fall apart within 20 years, second only to Slovakia (66%).

Of the 14 countries polled by YouGov – constituting 80% of the seats of the European parliament – it was only in Sweden (44%), Denmark (41%) and Spain (40%) that the proportion predicting implosion dipped below a majority.

Nearly seven decades after the creation of the European Coal and Steel Community, bringing together France, Germany, Italy, Belgium, the Netherlands and Luxembourg in a pact designed to stave off further war, three in 10 people polled said conflict among countries within the EU was a realistic possibility.

As many as a third of voters in France and Poland said they believed a war could be possible.

That sentiment was notably strong among people planning to abstain or vote for extremists next week. Nearly half (46%) of supporters of RN and 41% of supporters of Alternative für Deutschland (AfD) in Germany held this view.

Europeans are also concerned about faltering prosperity. The survey found that just a third of Germans and a quarter of Italians and French typically had money left over at month’s end for discretionary spending.

The findings reflect widespread concerns over next week’s elections, in large part sparked by the warnings of European leaders and the emergence of populist governments in several member states.

Macron has pitted himself as the leader of anti-populist forces in opposition to the likes of Matteo Salvini, Italy’s far-right deputy prime minister, while the European commission president, Jean-Claude Juncker, has warned voters against using the elections as a protest vote.

Despite the unifying impact of Brexit among the EU27, a divide has also emerged between east and west among the member states. Hungary’s nationalist prime minister, Viktor Orbán, who has targeted immigrants in his speeches and has run an antisemitic campaign in which his former mentor George Soros has been depicted as a hate figure, is pushing his vision of illiberal democracy.

The governments of Romania, Poland and Hungary are in the sights of the European commission for failure to respect the rule of law.

Across Europe, three-quarters of voters think politics is broken at either the national or EU level or both. In France only 15% think the political system works well.

With the latest Eurobarometer statistics showing that two-thirds of Europeans have positive feelings towards the EU – the highest recorded since 1983 – the ECFR’s director, Mark Leonard, said the onus was on pro-European parties to awaken the “silent majority”.

He said: “There are seven days to resolve the paradox at the heart of the European project. Support for EU membership is at the highest level since 1983, and yet a majority of voters fear the EU might collapse. The challenge for pro-Europeans is to use this fear of loss to mobilise their silent majority and ensure that it is not just the anti-system parties who get their say on 26 May.

“Pro-Europeans need to offer voters bold ideas for change that emotionally resonate and make the silent majority feel it is worth turning out at the end of May. It is not yet too late. With a volatile European electorate, there are up to 97 million voters who could still be persuaded to vote for different parties.”

The survey found that almost 92% of voters thought they would lose out if the EU collapsed. Fears about the ability to trade, travel and work in other EU countries topped the list of reasons.

Citizens feared losing unity on security and defence and valued being part of a bloc that could counter the US and China, amid growing economic uncertainty and the parlous nature of the transatlantic relationship.