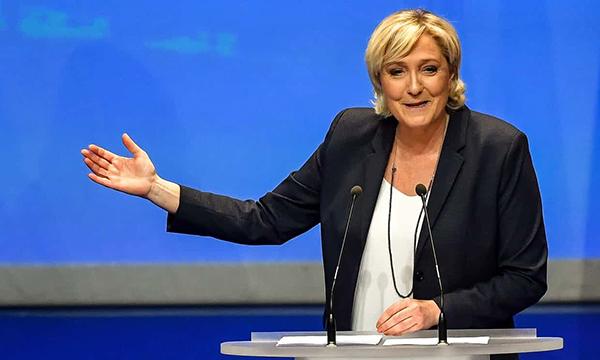 Marine Le Pen, the leader of France’s far-right National Rally, has asked an Estonian ally to remove a selfie from Facebook in which the pair made a controversial “OK” hand gesture, which has been linked to white-power messaging.

Le Pen was in Tallinn to meet MPs from Estonia’s far-right EKRE party, which recently became part of the country’s coalition government, as part of cross-continent negotiations on setting up a new bloc of nationalist and far-right forces after European elections next week.

She made the OK hand signal together with Ruuben Kaalep, a 25-year-old EKRE MP and the leader of its youth movement, and the Estonian politician uploaded the photograph to his Facebook page.

“I was in a selfie at his request, making a signal that to me means ‘ok’,” Le Pen told AFP.

She added: “I was later told that it may have an alternative meaning. As soon as I became aware of that, I immediately asked that the photo be removed from the Facebook account.

“I’d never heard of the second meaning of this trivial gesture.”

The photo appeared to have been deleted from Kaalep’s Facebook page, though others in which he made the same sign are still online.

EKRE party leaders, the father and son Mart and Martin Helme, made the gesture last month during their swearing-in ceremony as ministers in the new government. The former Estonian president Toomas Hendrik Ilves complained on Twitter that the pair had made a “white-power sign”.

Jaak Madison, an EKRE MP and likely to become an MEP if the party wins enough votes in the European elections, told the Guardian last week that the symbols were “pure trolling” aimed at riling the media and the party’s opponents.

EKRE now has five out of 15 cabinet positions in the government, despite a history of racist and misogynist rhetoric. Both EKRE and National Rally said they would join a bloc of nationalist forces led by Italy’s Matteo Salvini in a new European parliament.