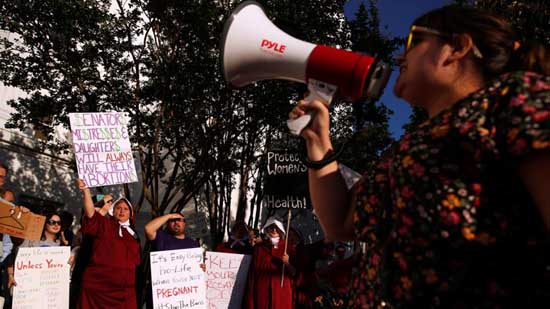 State legislators in Alabama and Georgia know that abortion bans will likely be overturned in lower courts. They are aiming higher.

Late Tuesday night, Alabama legislators passed a bill that would outlaw abortion at any stage in a woman’s pregnancy. They’re in good company: Earlier in May, Georgia Governor Brian Kemp signed a law making abortion illegal after a fetal heartbeat can be detected, or roughly six weeks after conception. Ohio, Mississippi, and Kentucky have all passed similar bills this year.

The state legislators who are passing these bills know they will be challenged in court. They also know they will probably lose. But their sights appear to be set higher than their state jurisdictions: With a solidly conservative majority on the Supreme Court, anti-abortion advocates are eager to seed the challenge that could one day take down Roe v. Wade, the 1973 opinion that legalized abortion up to the point of fetal viability. At the very least, they hope the Supreme Court will undercut Roe and subsequent decisions that reaffirmed abortion rights, the idea being that each legal challenge makes it a little harder to obtain an abortion in the United States.

With the political and legal landscape finally tilting in their favor, anti-abortion legislators feel empowered to move beyond abortion restrictions and take a shot at full bans. One day, they believe, this legislation won’t just be politically symbolic—they hope abortion will become illegal across the country.

Alabama’s bill goes significantly further than other recent ones we’ve seen at the state level. The bill holds doctors criminally liable for performing abortions at any point in pregnancy. If Governor Kay Ivey signs the bill into law, completed abortions would be considered a Class A felony, and attempted abortions would be a Class B felony. The legislation provides exceptions for abortions in the case of a “serious health risk to the unborn child’s mother” and in cases where “the unborn child has a lethal anomaly.” It does not, however, provide an exception for instances of rape or incest, although multiple amendments proposed that addition; legislators apparently wanted to pass a “clean” bill to send to the Supreme Court. Planned Parenthood, the largest provider of abortion services in the United States, is calling the bill “the most extreme abortion ban since Roe v. Wade” was decided.

Conservative legislators see themselves as champions of medical science and human rights. In the preamble to their new bill, Alabama legislators write that “medical science has increasingly recognized the humanity of the unborn child,” and point to a number of technological advancements in the past four decades that allow greater understanding of fetal development. They cite the principle laid out in the Declaration of Independence that “all men are created equal”; they claim that their efforts are in the same spirit as the anti-slavery movement, the women’s-suffrage movement, the Nuremberg war-crimes trials, and the civil-rights movement. They point to the Holocaust, Joseph Stalin’s Soviet gulags, the Rwandan genocide, and other slaughters, arguing that the number of lives taken in those horrific crimes are small compared with the alleged “50 million babies [that] have been aborted in the United States since the Roe decision in 1973.”

These justifications illuminate the motivation behind the new Alabama bill and similar legislation. Conservative lawmakers believe they are mounting a challenge to one of the most inhumane and flawed Supreme Court decisions of our time. Abortion opponents have attempted to restrict the procedure and overturn Roe ever since it came down, but they now believe they have a greater chance of success. But there’s no way to guarantee which state-level bill will eventually make its way to the Supreme Court, or that the sitting justices will reverse Roe in a single decision. For a decade or longer, the anti-abortion movement has put in place a barrage of state-level restrictions with the goal of starting court challenges. But in recent years at the high court, most have failed; in a 2015 decision, the Supreme Court forcefully pushed back against burdensome abortion regulations passed in the name of women’s health.

That was before Donald Trump won the presidency, however. During his two and half years in office, Trump has kept his promise of appointing self-described pro-life judges. The president has appointed two conservative Supreme Court justices, Neil Gorsuch and Brett Kavanuagh. While both maintained a posture of judicial remove during their confirmation hearings, promising to uphold the Constitution and merely interpret U.S. laws, both men are widely assumed to be opposed to or critical of abortion.

With the recent retirement of Justice Anthony Kennedy, the Court’s longtime conservative swing voter who has generally supported abortion rights, anti-abortion advocates speculated that they might soon enjoy a more sympathetic hearing. Indeed, even the Court’s liberal justices believe Roe may be in danger: In a decision unrelated to abortion this week, in which the conservative majority overturned a precedent related to states suing other states, Justice Stephen Breyer wrote in his dissent, “Today’s decision can only cause one to wonder which cases the court will overrule next.” As if to make his point totally clear, he sprinkled his dissent with citations of Planned Parenthood v. Casey, the 1992 decision that established specific parameters for the abortion rights laid out in Roe.

But even five conservative justices may hesitate to fully knock down Roe. Precedent is a powerful legal principle, allowing attorneys to advise their clients and facilitate consistency in how laws are enforced over time. If Georgia’s so-called heartbeat bill or Alabama’s abortion ban were to end up before the high court, they might offer a dramatic opportunity for the Court to undo 46 years of jurisprudence on abortion. Or perhaps one of these bills will provide an opening: a chance to limit abortion, little by little, until one day it has been banned in all but name.