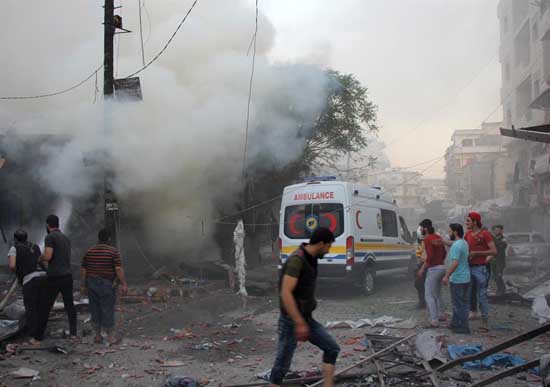 President Recep Tayyip Erdoğan and his Russian counterpart Vladimir Putin have agreed that a working group on Syria’s northwestern province Idlib should convene as soon as possible, Turkey’s Foreign Minister Mevlüt Çavuşoğlu said on May 15.

“There are inter-alleged claims on harassments. This working group should be gathered as soon as possible to put these [claims] on the table with the evidence and be examined,” Çavuşoğlu told reporters.

The minister said that attacks by Syrian government forces were damaging the prospects of forming a U.N.-sponsored committee to draft a new Syrian constitution.

“This aggressive attitude of the regime needs to change. The attacks must stop,” he said, recalling that the parties have just met in Astana and the political process is being discussed.  “While we made progress in the establishment of the Constitutional Commission, the regime’s aggression on the ground can ruin everything,” he said.

There are no direct attacks against Turkish military observation posts in Idlib at the moment, but Ankara has its concerns, he added.

A recent offensive targeting Idlib and surrounding areas by the Syrian army and its allies, backed by Russia, has uprooted more than 150,000 people, the United Nations says, while rescue workers and civil defense officials say more than 120 civilians have been killed.

Following a phone call between Erdoğan and Putin on May 13, Defense Minister Hulusi Akar and his Russian counterpart discussed ways to reduce tension in Idlib on May 14.

Moscow had been piling pressure on Ankara to start an operation against the opposition-held areas after Turkey’s failure to push rebels to agree to Russian patrols and get al Qaeda-inspired militants out of a buffer zone that underpinned the Turkish-Russian deal.