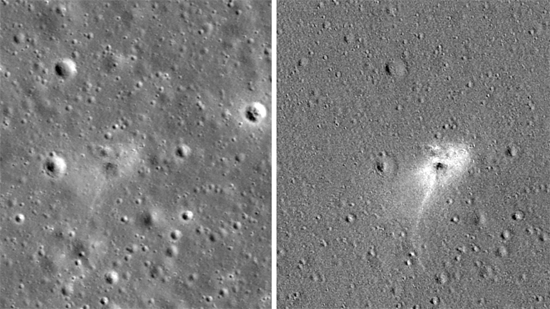 NASA has released photos of the Israeli Beresheet spacecraft’s impact site on the Moon’s surface. The lander smashed into the celestial surface during a botched landing attempt last month.

Black and white photos include ‘before’ and ‘after’ images of the crash area at the Sea of Serenity, where the maiden Moon mission by SpaceIL crashed on April 11 after suffering engine failure.

The image snapped by NASA’s Lunar Reconnaissance Orbiter (LRO) on April 22, just 56 miles (90 kilometers) above the surface, shows what the space agency referred to as a “dark smudge” roughly 10 meters wide that was not visible in the photo of the same location taken in 2016.

“The dark tone suggests a surface roughened by the hard landing, which is less reflective than a clean, smooth surface,”NASA said, noting that its cameras “could not detect whether Beresheet formed a surface crater upon impact.”

Beresheet, Hebrew for the biblical phrase “in the beginning,” would have been the first Israeli and first privately-funded spacecraft to land on the moon. To date, only Russia, the US, and China have managed to perform controlled ‘soft’ landings on the lunar surface. Despite the crash, Prime Minister Benjamin Netanyahu pledged state support for a new Israeli moon mission.