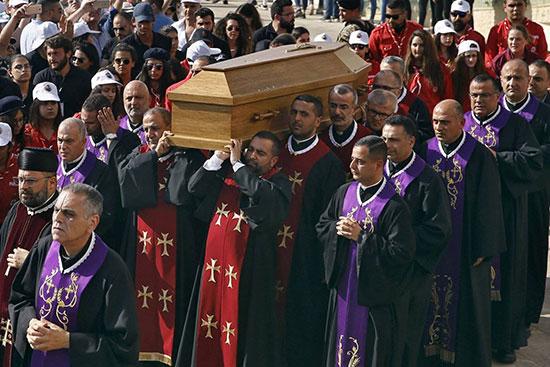 Thousands of mourners from all over Lebanon flocked to Bkirki on Thursday to take part in the farewell ceremony of former Maronite Patriarch Cardinal Nasrallah Boutros Sfeir.

The funeral of the Patriarch began at 5:00 pm after the arrival of President Michel Aoun, Speaker Nabih Berri and Prime Minister Saad Hariri.

“Our late patriarch wanted the Qornet Shehwan Gathering to be a unifying body of Christian forces who believed in the country’s sovereignty,” Maronite Patriarch Beshara al-Rahi said in his eulogy of Sfeir.

“He worked on removing barricades, enhancing national unity and strengthening coexistence, which he considered to be Lebanon’s essence,” he added.

“Everyone agrees that patriarch Sfeir is a national loss and they saw in him the patriarch of the second independence and reconciliation who will not be repeated,” al-Rahi went on to say.

Delivering a speech in the name of Pope Francis, Cardinal Leonardo Sandri said Sfeir was a “free and brave man who performed his mission in turbulent circumstances.”

“He arduously defended his country’s sovereignty and independence and will always be a shining figure in Lebanon’s history,” he added.

Also present at the funeral were French Foreign Minister Jean-Yves Le Drian and representatives of the Vatican and the Saudi, Qatari and Jordanian leaderships.

Le Drian told LBCI TV that Sfeir was “a man of peace,” adding that he was present in Bkirji to “stress that France will always stand by Lebanon, in the difficult and happy times.”

“Patriarch Sfeir is the father of peace and coexistence in Lebanon and today we’re taking part in the funeral at the Saudi leadership’s orders,” Saudi Ambassador to Lebanon Walid al-Bukhari said.

A large number of ministers, MPs and ambassadors were also present in Bkirki.

Bkirki had opened its doors on Wednesday to all mourners. The body of Sfeir arrived yesterday morning from the Hotel Dieu Hospital to the Patriarchal edifice before being transferred to the Church of Our Lady of Transition in Bkirki.

All Lebanese leaders had urged for mass participation in the funeral of the Patriarch.

Sfeir, who was set to turn 99 on Wednesday, died on Sunday after days of intensive medical care.

Sfeir wielded considerable political influence during the country’s civil war and was an ardent advocate of a Syrian troop withdrawal.

He became the leader of the church in 1986 until he resigned in 2011 due to his declining health, and held the title “76th Patriarch of Antioch and the Whole Levant”.

He was a respected power broker during the 1975-1990 civil war, which saw bitter infighting between rival militias including opposing Christian factions.