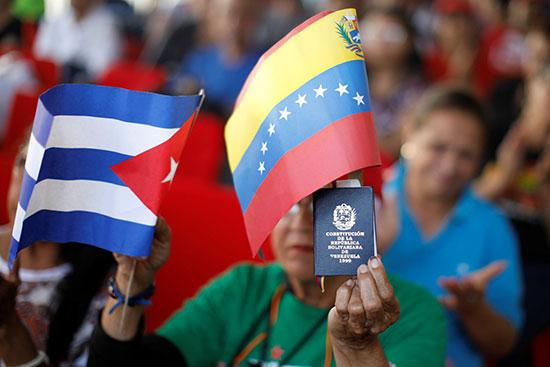 The Trump administration should include Havana and Moscow in its efforts to remove Maduro from power.

By Jorge G. Castañeda-Professor Castañeda is a specialist in Latin American affairs-  The New York Times

MEXICO CITY — A failed attempt at a military uprising in Venezuela on April 30 is the latest chapter in the country’s slow march toward catastrophe. The situation now has broader international implications, stretching far beyond the region.

Russia has become a major player in the drama. Venezuela was on the agenda when Secretary of State Mike Pompeo first spoke with his Russian counterpart in Moscow in March, when they met in Helsinki earlier this month, and again this week in Sochi. President Trump discussed the Venezuelan situation with President Vladimir Putin of Russia on May 3. Nothing seems to have come from these exchanges. But it’s clear that there are stark differences between the two governments, and a growing awareness on Russia’s part of how much Washington cares about the matter.

Last month, the Russians sent roughly 100 private military contractors to Caracas. They continue to sell arms to Nicolás Maduro’s government, and to defend him at the United Nations. Their friends in Cuba have been lurking around Venezuela for years and are now occupying a more crucial role than before, likely encouraged by Russia.

The Trump administration is right to engage with the Cubans as it seeks to resolve the political standoff in Venezuela. But if officials misstep it could open the road for deeper Russian participation.

What does Mr. Trump really want with Russia, Cuba and Venezuela? Senator Marco Rubio, Republican of Florida, would probably prefer to forget about Venezuela and focus on ousting the regime of Raúl Castro, leader of the Communist Party. Mr. Trump might only care about winning Florida in 2020, where the Cuban and Venezuelan vote could be crucial to clinching a victory.

The administration should keep applying pressure to squeeze Cuba as much as possible, and then suggest to Moscow and Havana that it can loosen the screws if Miguel Díaz-Canel, Cuba’s president, and Mr. Castro help solve the Venezuelan crisis. Cuba might not have much choice, especially if Russia is cajoled into nudging it in that direction.

For the first time since Title III of the Helms-Burton Act was signed into law in 1996, the Trump administration is permitting United States citizens to seek compensation for properties seized by Fidel Castro’s government in federal courts. While they’re unlikely to recover any lost assets in the near future, American, European, Canadian and Latin American investors in Cuba who use confiscated properties can also be sued, or have their American visas revoked. Suits against Carnival Cruise Lines and a couple of Spanish hotel operators have already been filed.

Mr. Trump has also tightened travel restrictions for Americans traveling to Cuba, and capped remittances to $1,000 per person, per quarter. The island produces very little and has little money to spend on imports. All together, these measures will affect the already adverse economic situation the country is facing — reduced oil shipments from Venezuela, a sharp drop in American tourism, and a general slowdown in foreign investment.

In April, Mr. Castro warned of looming economic hardships. His assurance that the island would not experience a new “special period,” as it did when the Soviet Union collapsed during the ’90s, comforted no one. In Castrospeak, when something is said not to happen, it likely will. The island produces very little and has little money to spend on imports. As of last week, eggs, chicken and pork are being rationed, as the country struggles to cope with shortages of staple foods. If the situation persists, the regime may face real protest for the first time since the Soviet Union collapsed in 1991. Russia might prefer to concentrate its efforts on saving Cuba, rather than focusing on it and Venezuela simultaneously.

Three reasons are generally cited to explain Russia’s growing involvement in Venezuela. First, to protect and perhaps one day recover the more than 60 billion dollars different Venezuelan entities owe various Russian banks and companies. A post-Maduro government may not recognize these debts, many of which were not approved by Venezuela’s National Assembly.

Second, Mr. Putin is picking his nose at the United States by being a nuisance in its backyard, in a tit-for-tat response to what Moscow considers NATO’s interference in Eastern European affairs.

Lastly, and perhaps crucially, Russia hopes to project power in a region the American government considers its sphere of influence. Russia has maintained close ties with Havana for 60 years, dating back to when Nikita Khrushchev was leader of the Soviet Union. By extending loans to Argentina, Bolivia and Ecuador, Mr. Putin is trying to expand Russia’s influence in the region.

Washington has a strong hand to play, but it must do so wisely. If in fact Mr. Trump wants to do away with both governments in Cuba and Venezuela, or if he is really after regime change only in Cuba, this will lead to failure and invariably anger the country’s democratic partners in Latin America and Europe. With the exceptions of Nicaragua, Bolivia, Uruguay and Mexico, the region wants Mr. Maduro out. But it will not support Mr. Trump in any effort to dislodge the Cuban dictatorship.

Instead, Mr. Trump should continue to press Cuba to join its efforts to remove Mr. Maduro. The country can play a crucial role by affording him a safe haven and by participating in the transitional arrangements that would ensure a democratic transition: freeing all political prisoners and allowing all opposition leaders to run for office in free, fair and internationally supervised elections, re-establishing freedom of the press and association, gradually and peacefully reducing its footprint in Venezuela. Mr. Trump should engage Russia to persuade the Cubans to do so. And he should remember that after all, there is no carrot and stick approach without a carrot.

Jorge G. Castañeda, Mexico’s foreign minister from 2000 to 2003, is a professor at New York University and the author of “Utopia Unarmed: The Latin American Left After the Cold War.” and a contributing opinion writer.