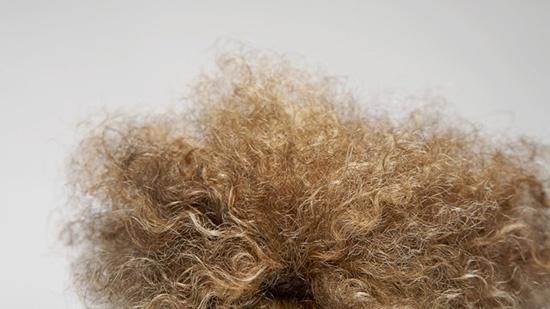 There’s a scientific reason hair can be so difficult to smooth.

I began to lose hope in my hair’s future while watching Friends in 2003. During a series of episodes in which the whole gang took a trip to Barbados, the expanding frizz of Monica Geller’s hair in the Caribbean humidity garnered its own narrative arc. The character, known for her exacting, control-freak tendencies, was powerless against her follicular shortcomings.

What this meant for my then-teenage self felt clear. If even Monica couldn’t control her hair—and if her frizz was relatable enough for an extended joke on an inescapably popular sitcom—my own destiny couldn’t be much better. Until that point, I had maintained some optimism: The women’s magazines I snuck into my mom’s cart at the grocery store contained so many smooth-hair tips and tricks that I’d assumed the flat-iron arts were a thing I could eventually master. But as Monica’s hair ballooned further from scene to scene, so too did my doubts that my own fluff-ball tendencies could be blamed on adolescent inexperience.

Many of you can guess how this story ends, a decade and a half later: I have bought many hair serums, tried many techniques, watched many YouTube tutorials, and moved out of the oppressive heat and humidity of my native Atlanta, and nevertheless, my hair persists. Looking down the barrel of another steamy summer, I decided to find the answer, once and for all: Can frizz ever really be defeated?

To solve a problem, you first must determine the cause. In the case of frizz, the ultimate culprit is a hair cuticle that’s raised instead of flat. The cuticle is the outside layer of your hair, and when it lies flat, hair appears smooth. The more the cuticle is raised, the easier it is for moisture to penetrate the hair shaft. “Naturally, hair wants moisture,” says Vanessa Thomas, the CEO and senior chemist at Freelance Formulations, a Florida-based company that develops cosmetics, including hair products. “Part of the cause of frizzing is dehydration.” When the air around you is wet, your hair’s natural response is to suck up some of the ambient moisture to create equilibrium. That’s why frizzed hair feels thicker: Raised cuticles create a rougher texture, and each individual strand is, for lack of a better term, bloated.

But frizz doesn’t affect all people equally. Curly hair has a more raised cuticle, as does hair that’s been colored or otherwise chemically treated. Damage from heat styling can affect the cuticle’s integrity, and fine hair tends to be weaker than its thicker counterparts, says Thomas. Natural oils from the scalp can help ameliorate these issues by both coating and moisturizing hair, but that doesn’t work for everyone. “Curly hair specifically tends to be more susceptible to frizz because of the complexity of curl patterns,” explains Candace Witherspoon, a stylist and hair-care educator at Devachan Salon in Manhattan. “Oil from the scalp sometimes has a hard time traveling down the hair shaft.”

There are two different schools of thought on how to mitigate the untamable look of a misbehaving hair cuticle: Use synthetic chemicals to create a barrier layer that your hair can’t create itself, or moisturize hair into complacency with natural oils so strands are less likely to absorb moisture from the air. Thomas says that the best synthetic barrier chemical on the market right now is silicone, and it’s the one her clients most frequently request. “In about 85 percent of the cases, it’s an antifrizz treatment serum that contains silicone” that they want developed, she says.

Silicone is a controversial ingredient, however, and Witherspoon tells her clients to avoid it. “Sulfates, parabens, and silicones are all products that strip hair of its natural oils,” she says. Silicone can cause product buildup on hair, which means it might make it more difficult for strands to absorb much-needed moisture from oils or conditioners.

Even so, silicone remains “the highest-performing ingredient you can have for antifrizz,” says Holly Maguire, Freelance Formulations’ creative director. (The company develops both silicone and silicone-free frizz products for its clients.) Maguire says the chemical’s drawbacks can be managed: Periodic use of clarifying shampoos and rinses gets rid of residue, although some anti-buildup products also strip hair of moisture, which can put antifrizz efforts back to zero. The most important thing, Maguire emphasizes, is to be aware of the chemicals you’re using and how they can affect your hair.

For her clients, Witherspoon recommends an approach that uses products with plant-derived oils that moisturize hair and help create a protective outer barrier. Beyond product, though, she says that the way people treat their hair on a day-to-day basis can have a big impact on creating or avoiding frizz. “It can also be a result of the amount of manipulation curlies sometimes tend to do to their hair from brushing, combing, fluffing, or touching just a bit too much,” she says. Often, she says, the best thing you can do is use moisture-rich products, sleep on a silk pillowcase to avoid friction, and not battle your hair’s natural tendencies so much.

Hair frizz might seem like a frivolous concern, but hair—and especially how black women, who constitute much of Witherspoon’s clientele, wear their hair—can have an outsize impact on the course of a woman’s professional and social life. Curly hair has a history of being viewed as unprofessional or ungroomed, an assumption with frequently racist undertones. The episodes of Friends that sparked my teenage hair-anxiety spiral feature an extended, derisive comparison between Monica and Diana Ross, as though viewers would surely understand that Diana Ross is embarrassing because of her hair. For many women, successfully controlling their hair goes far beyond aesthetics.

Still, both Thomas and Witherspoon agree with that sinking feeling I had in the mid-2000s, a period of time where American culture was particularly enamored of flattened hair: Frizz isn’t a problem that can be solved completely, at least with current hair-care technology. Even a silicone serum’s protective powers break down throughout the day or when confronted with too much moisture. In the two decades I’ve spent unscientifically product-testing my way through serums, sprays, shampoos, chemical relaxers, and keratin treatments, nothing totally does the trick for my fine, curly, color-treated, heat-damaged hair.

Part of that is because my head is a worst-case frizz scenario of partially my own making. But the larger issue might be that topical cosmetic treatments of any kind are imperfect fixes for the ways that human bodies naturally deviate from arbitrary beauty standards. There’s no fancy goo you can put in your hair on a humid day that will be as effective as simply refusing to worry about it. That’s Witherspoon’s approach: “I like to tell my clients to not be afraid of a little frizz.”