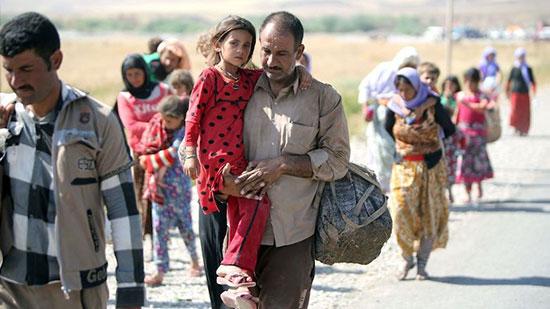 Fleeing Yezidis cross the border from Iraq into Syria in 2014 after the Islamic State attacked their villages. (Photo: AFP/Ahmad al-Rubaye)

ERBIL (Kurdistan 24) – A Yezidi (Ezidi) lawmaker in the Kurdistan Region Parliament on Thursday announced the introduction of a bill that calls on the Iraqi government to mark annually the genocide that the ethno-religious minority suffered at the hands of the self-proclaimed Islamic State.

Hediye Murad Heyder, an Ezidi MP for the Kurdistan Democratic Party (KDP), told reporters during a press conference that the bill requests the Federal Government of Iraq to recognize Aug. 3 as the national day of genocide against the Ezidi minority.

The emergence of the Islamic State and its violent assault on Iraq’s Ezidi-majority city of Sinjar (Shingal) in August 2014 led to the displacement of hundreds of thousands of members of the Ezidi community and the killing of thousands.

According to recent Kurdistan Regional Government (KRG) statistics, the terror group had kidnapped 6,284 Ezidis, among them 3,467 females, and 2,717 males. So far, 3,371 Ezidis have been rescued.

Heyder said Iraq shoulders a responsibility to compensate the victims and families of those who suffered on that tragic day, as well as those who continue to suffer from trauma related to the genocide.

The MP also underlined that the Iraqi government should work to rebuild the areas in Shingal destroyed as a result of the war against the terror group and to facilitate the voluntary return of Ezidis to their original homes.

“The federal government is responsible for compensating the victims of the genocide and rebuilding their homes,” she told reporters.

The Ezidi lawmaker called on the relevant authorities in the Kurdistan Region to help deliver the bill to the Iraqi Parliament so it can be implemented accordingly and so the Ezidi people can receive their justice.

A representative for the Ezidi religious body also delivered a speech at the press conference, extending his gratitude to “the people who want to help us and who recognize the injustices we have suffered.”

He also praised the autonomous Kurdish region’s government who he said has been “relentless in their support for the Ezidi people.”