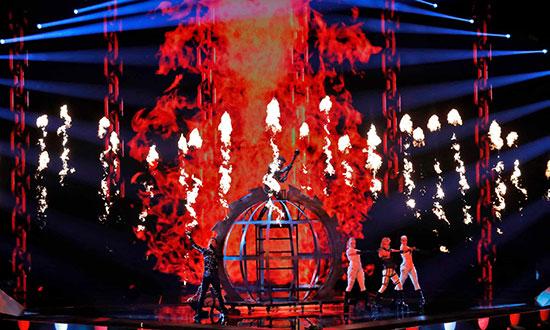 The must-see moments of the show, which will be broadcast from Tel Aviv on Saturday

The Eurovision song contest is upon us once again, but with the grand final scheduled for three hours and 40 minutes non-stop, it’s not for the faint-hearted. To help you plan your loo breaks and trips to the fridge around the must-see moments, here’s our guide to the weird, the wonderful and the top tips for this year’s contest in Tel Aviv, Israel.

Every Eurovision needs a singalong anthem to get the party started, and this year’s comes courtesy of San Marino’s Serhat. It’s super-catchy and cheesier than a parmesan cracker, but it will get you in the mood.

Sweden has a rich history of Eurovision bangers, and this piece of perfectly polished pop is no exception. Lundvik also co-wrote the UK’s entry this year – though this one is (sadly for us) considerably better.

This stripped-back, self-penned ballad about lost love is one of the favourites to win, and is definitely this year’s goosebumps moment. It’s pretty bleak by Eurovision standards, but hauntingly beautiful.

Mixing some local folk tradition in a pop song doesn’t always hit the mark at Eurovision, but Norway has nailed it this year – this uplifting anthem is punctuated by traditional Sámi singing called joik.

You may think that a techno-BDSM-punk fusion with an anti-capitalist message shouted in Icelandic isn’t for you, but you’d be wrong. Hatari’s Hatred Will Prevail is the must-watch of this year’s Eurovision. Do not miss it.

Like the UK, Italy is one of the ‘big five’ in the Eurovision, which means it automatically qualifies for the grand final. Usually that’s an excuse not to make an effort, but this year Italy has entered with a hypnotic trap number with Italian and Arabic influences. The coolest song this year by a long way.

Switzerland has a rich history of playing it safe on the Eurovision stage, and has only qualified for the grand final four times in the past 15 years. But this is a huge tune and a polished performance – the song you’ll be hearing in bars and clubs all over Europe this summer.

Staging is crucial at Eurovision – use of treadmills, glass boxes or a burning piano can give you those critical extra points. This year Australia has raised the bar by elevating Kate and her backing dancers on giant wobbly poles for a pop/opera/EDM performance with a difference.

And finally, do not miss the interval this year – while it might be tempting to take an extended break, pop legend Madonna is performing live in Tel Aviv. Happy Eurovision!