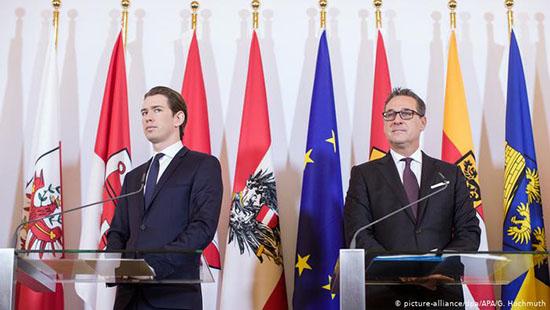 Chaired by a former Nazi functionary and SS officer more than 60 years ago, the Freedom Party of Austria (FPÖ) has taken a controversial path through the decades. The latest allegations surround corruption.

The Freedom Party of Austria (FPÖ) was founded in 1956 as a Germanic national liberal party with close associations to the Nazis. Its first two chairmen were former SS officers: Anton Reinthaller (1956-58) and Friedrich Peter (1958-78).

The following decades saw the the FPÖ veer politically from the extreme-right towards the center and back again until it adopted a far-right, anti-elite and populist party platform from 1986 onward.

The FPÖ scored its biggest political victory in 1999 when it won 26.9% of the vote in nationwide legislative elections. In early 2000, FPÖ leader Jörg Haider made a deal with the conservative Austrian People’s Party (ÖVP) to form a coalition government.

The son of Austrian Nazi Party members, Haider had become leader of the FPÖ youth movement in 1970 and nine years later, the party’s youngest delegate to parliament. By 1986, he was espousing nationalist, anti-immigration and anti-EU views as head of the party.

The 2000 coalition agreement was the first time a party with Nazi origins had become part of a European government since the end of World War II.

The coalition deal triggered an unprecedented response from the European Union. Portugal, then holder of the EU’s rotating presidency, said the other 14 EU states would refuse bilateral contacts with Vienna, not back any Austrian candidate seeking a position in an international organization and only receive Austrian ambassadors “at a technical level” if the FPÖ joined a new government in Austria.

“If a party which has expressed xenophobic views, and which does not abide by the essential values of the European family, comes to power, naturally we won’t be able to continue the same relations as in the past, however much we regret it,” said then Portuguese prime minister and now head of the UN, Antonio Guterres. “Nothing will be as before,” he wrote.

Under the 1997 Amsterdam treaty, an EU member state can be suspended if it is in “serious and persistent breach” of the principles of liberty, democracy, respect for human rights, fundamental freedoms and the rule of law.

Because the FPÖ had received a larger share of the vote than the ÖVP, Haider had been in line to become Austrian chancellor. But strong international pressure convinced both parties to give the chancellor post to the ÖVP. Haider stepped down as FPÖ chief in February 2000.

In the parliamentary vote two years later, the FPÖ’s vote share collapsed to 10% and internal party disputes led to a split and formation of a new party headed by Haider, the Alliance for the Future of Austria (BZÖ). Both parties performed well in the 2008 parliamentary elections, with the FPÖ winning 17.5% and BZÖ 10.7%.

Just 13 days after the elections, Haider died in a car crash in southern Austria. Police found no evidence of foul play.

After a string of leaders following Haider’s departure, Heinz-Christian Strache was elected FPÖ party chairman in 2005. The trained dental technician became active in Viennese politics in 1991 and was elected to the Vienna parliament in 2001. He led the party further to the right on an anti-immigrant and anti-foreigner platform.

While the party did well in opinion polls, Strache himself rarely performed well among Austria’s preferred candidates for chancellor. His abrasive and populist style as a campaigner did little to recommend him among the country’s conservatives as a man worthy of high office.

The FPÖ’s position as a nationalist party was largely overtaken by ÖVP head Kurz, who took a hardline position in the 2015 refugee crisis, when Austria took in tens of thousands of migrants and refugees from Syria. By the end of 2015, more than 90,000 people had applied for asylum in the country.

Under Strache, the FPÖ nevertheless won 26% of the vote in the 2017 parliamentary elections, coming in third behind the ÖVP and the center-left Social Democrats (SPÖ). With 31% of the vote, Kurz agreed to form a government coalition with the FPÖ.

Unlike in 2000, the EU did not sanction Austria over the FPÖ’s entry into government amid strong populist sentiment across the continent and right-wing parties in power in Hungary and Poland.

Shortly after the coalition government was formed, there were armed police raids on the domestic intelligence services. Material relating to the agency’s infiltration of right wing and neo-Nazi organizations was seized, according to the Financial Times, which also said the FPÖ has control of all three Austrian intelligence services.

Strache’s appointment as vice chancellor, who often used anti-Semitic and racist slurs, made many people uneasy.

Controversies dogged the ÖVP-FPÖ coalition from the beginning. Most recently, the FPÖ member and deputy mayor of Hitler’s birthplace, Christian Schilcher, resigned after he wrote a poem for a party newspaper that compared migrants with rats to warn against “mixing” cultures.

Then, just days before elections to the European Parliament in May, Germany’s Der Spiegel magazine and Süddeutsche Zeitung newspaper published reports on a secret video recording that reportedly showed Strache offering an alleged Russian investor favors in exchange for electoral help. Thevideo was taken without Strache’s knowledge on the Spanish island of Ibiza in early 2017.