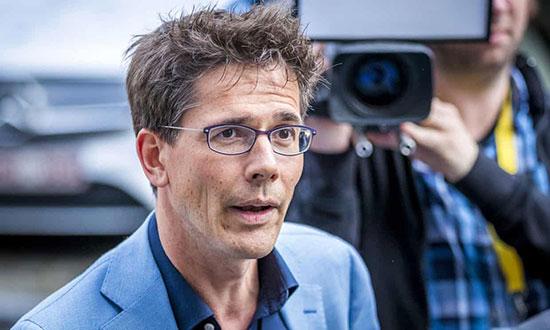 Green candidates, on course for their best showing, could play a big role in a divided parliament

Europe’s Greens are on course for their strongest showing to date in next week’s European elections – and could find themselves kingmakers in a newly fragmented EU parliament.

“We’ll be at the table,” said Bas Eickhout, an MEP from the Netherlands and a co-candidate of Europe’s Green parties for European commission president. “We have a good chance to determine the new majorities. And we will have our demands, on green issues, social issues, and the rule of law.”

With the parliament’s main centre-right and centre-left groups predicted to shed seats and populist parties critical of the EU expected to gain, the votes of the Greens’ projected 57 or more MEPs could well prove critical to a broad pro-EU alliance in the 751-seat assembly after the election.

“The mainstream parties are forecast to lose their joint majority for the very first time,” Eickhout said. “At the same time, it’s going to become much harder for the centre right to court votes to their right. They will have to look to the progressives.”

Support for Green parties, particularly in northern Europe, has surged as progressive voters are increasingly drawn to their pro-EU stance, humane approach to migration and clear positions on existential issues such as the climate crisis and sustainability.

Last year, Green parties doubled their vote in Bavaria to become the conservative German state’s second party, won several Brussels districts in Belgian local elections with a 30% vote share, and boosted their tally of MPs in Luxembourg by 50%.

The Finnish Green League now has 20 MPs after scoring 11.5% in April’s general election, having finished second in municipal elections in Helsinki – and first in two other cities – in municipal elections the previous year. Greens are in government in Sweden and Luxembourg; they are likely to join a centre-left coalition after elections in Denmark next month; they are strong contenders in Belgium; the Greens have run Amsterdam city council since last March; and they currently co-rule nine of Germany’s 16 states.

More than 30 national parties make up the European Green party, campaigning on a common core platform across national borders. In the European parliament, the Greens are part of the Greens/EFA group with progressive regionalist parties such as the Scottish Nationalist party (SNP), the Welsh party Plaid Cymru and the Swedish and German Pirate parties.

Eickhout said three factors explained the Green movement’s improving fortunes. “Most obviously, concern about climate change has rocketed up people’s list of priorities,” he said. “Our track record on that is obviously strong, and has been for many years.”

Where Green parties have been in government, “we have shown we are more than capable,” Eickhout said. “In fact, our popularity tends to increase.” (In 2016, he noted, voters in the German state of Baden-Württemberg re-elected a Green premier, with Angela Merkel’s Christian Democratic Union (CDU) as junior coalition partner.)

Sergey Lagodinsky, candidate 12 on the German Greens’ list for the European elections, said the election of Robert Habeck and Annalena Baerbock – both from the party’s more centrist, “Realo” wing rather than the left-leaning Fundis – went a long way to explaining its current surge.

“They have managed to present clean-cut, progressive arguments and take on board radical ideas, such as the debate over expropriating private landlords, while at the same time displaying the communicative skills to bring these ideas into the centre,” Lagodinsky said. “No other party can offer that at the moment.”

Sven Giegold, one of the German Greens’ two lead candidates for the European elections, said voters “recognise that they are dealing with a new, modern Green party, not just the old leftwing movement”.

He got the loudest applause on the campaign trail, he said, when accusing the current German government, a “grand coalition” between the Christian Democrats and the Social Democrats, of letting themselves be driven by fear of the far-right Alternative für Deutschland (AfD).

“Greens want a Germany that has plans for Europe which are at least as ambitious as Emmanuel Macron’s. And increasingly it’s not just traditional Green supporters that see things that way, but CDU voters too.”

Across the continent, Green parties are benefiting from a fragmentation of politics, with support for mainstream parties in decline – particularly the centre-left, which many voters feel betrayed their principles by backing austerity after the 2008 financial crisis.

European Greens have experienced similar polling surges in the past, most recently after the 2011 Fukushima nuclear disaster in Japan. But a clear shift away from the traditional right-left economic divide in politics towards a debate centred more on ideology and culture suggests this one could be more structural.

In several countries, Greens are polling higher than the traditional centre left: GreenLeft, which doubled its seats in Dutch senate elections in March, is polling at 11% in the European elections and should end up with three MEPs, against 7.7% and two for the ailing Labour party (PvdA).

Die Grünen are Germany’s second party, with a projected 18.5% and 18 MEPs, compared with 15.5% and 15 seats for the Social Democrats; in France, Europe Écologie-Les Verts are on 8% and eight MEPs, with the once-mighty Socialist party struggling to cross the 5% threshold for representation in Strasbourg.

Jesse Klaver, the GreenLeft leader in the Netherlands, believes the days of the social democrats are over. “They are parties of the past,” he has said; the debates of the future will be on issues such as climate change, inequality, migration – where progressives, such as the Greens, represent a starker contrast to the populist right.

Eickhout agrees. “On the right, we’ve seen the rise of populist parties of different shades but with the same negative message – no refugees, no climate problem, no more EU integration,” he said. “I think on the left we see the problems, but are generally more constructive.”

Besides Germany, the Netherlands and France, Eickhout said the movement, which is pledging to introduce a minimum income in all member states and phase out coal by 2030, expects to be boosted by a strong showing from the UK Greens, whose explicit anti-Brexit stance is winning support from remain voters. It also hopes to win its first MEPs in Poland and Slovenia, and do better than before in southern Europe.

There, economic hardship has tended to trump the Greens’ anti-materialist message. In Italy, after more than two decades of economic stagnation and unemployment, barely 2.4% of voters list the environment as a top priority. In Spain, the Greens are running in partnership with the radical-left party Podemos.

If the Greens/EFA group in the European parliament finds itself in a position to shape events, it will exert maximum pressure, firstly, on climate policy, Eickhout said. “We will want to see not just words, but deeds.”

The Greens will also demand social justice when it comes to who will foot the bill for the green transition. “We have to move towards the principle that the polluter pays,” he said. “The people cannot be expected to pay.”

Finally, the party will expect in exchange for its backing a radical change of tack from the centre-right European People’s party (EPP) group, which has come under heavy fire for its lukewarm criticism of the Hungarian prime minister, Viktor Orbán, and his continued attacks against the EU and the rule of law.

“In a lot of places the rule of law is threatened,” Eickhout said. “Not just in Hungary and Poland; you see it now creeping into Italy, Austria – a steady undermining of the judiciary, the media, NGOs, academics … We have to decide: are we a Europe that will defend democratic values, or just a collection of strong national states?”