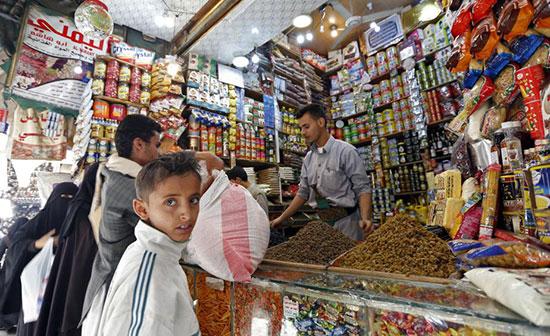 Markets in the Houthi rebel-held capital are flooded with Saudi and Emirati products, leaving a bad taste for some.

Yaser Mohammad had spent every Ramadan in his hometown of Hodeidah, except the year he went to Saudi Arabia to perform the Umrah pilgrimage to Mecca.

But last summer, the 40-year-old, his pregnant wife Hanan al-Hushaibri, and their two daughters fled the port city when fighting escalated between the Saudi-led coalition and the Houthis.

Now in the capital, Mohammad supports his family, including the new addition, his seven-month-old son, by driving a minibus, dropping off an increasingly shrinking pool of customers who can afford his service.

During Ramadan, many of his customers shop for juice, dates and milk, and it was outside a market, waiting in a parking lot, that Mohammad noticed something he hadn’t seen before.

He had been in the same market the day before, buying cheese for his family. He had looked at the cheese’s expiration date and its price, but hadn’t realised that what he had bought was produced in the country leading the coalition that bombed his city.

“If I had known that this product is manufactured in Saudi Arabia, I wouldn’t have bought it,” he said.

Like Mohammad, few Yemenis can afford to worry about where their products are coming from these days, with more than 22 million, or three-quarters of the population, reliant on food aid to survive. According to the United Nations, nearly 10 million are “one step away from famine”.

Saudi products have always been readily available in Yemeni markets. In 2015, the last year World Bank trade figures are available for Yemen, the country imported $546m goods from Saudi Arabia, behind China and the United Arab Emirates.

But after four years of a war that has seen coalition bombs regularly hit civilian areas – including a milk factory, markets and factories – there is frustration in some corners of the capital that Saudi goods, and also those from Riyadh’s coalition partner the UAE, are pervasive and alternatives are hard to find or expensive to buy.

Middle East Eye visited seven markets across various parts of Sanaa and several market stalls in its Old City. Will this survey was by no means scientific, at all the markets visited the majority of the products sold were from Saudi Arabia and the UAE.

Abdullah Noaman, under-secretary of internal trade for the Houthi-run ministry of trade and industry, told MEE that he believes the coalition has aimed to make Yemen a captive economy.

Saudi Arabia has stopped a long list of Yemeni products from being exported through its blockade imposed at the start of the war.

Some products are banned altogether, such as Yemeni pomegranates, which used to be exported to Saudi Arabia from the Houthi stronghold of Saada and have now been blacklisted by Riyadh.

But even before the banning, pomegranate farmers complained that coalition air strikes had cut their exports by around a third by causing a lack of fuel and water necessary for cultivation, according to a Reuters report.

“These countries don’t respect the rights of their neighbour, nor the humanitarian side, as they have shelled plants, bridges and roads,” Noaman said. “We should be warned of products of a country dealing with Yemenis in a position of weakness.”

Shopkeepers in Sanaa’s Old City say that most of the time that is not really an option for them. Mohammed al-Qabesi, a date merchant, said all of his dates, a popular Ramadan treat, are produced in Saudi Arabia.

“All my dates are Saudi, the country of aggression,” he said.

“There is no alternative for the Saudi sweet dates. If we said ‘let’s have Turkish dates’ [we wouldn’t be able to]. Turkey exports only perfume, and the Yemenis are only known for cultivating qat,” Qabesi said. Maybe China would start exporting dates, he joked.

Mohammed al-Hadhri, another shopkeeper in the Old City who sells cooking oil, juices and other sundries, said he feels pressured to buy products sold by countries participating in the coalition because they are the most affordable and readily available. And when he buys products from elsewhere, Hadhri said, they often arrive late.

“The issuing of permits for alternative products is said to have been regularly delayed since 2015,” he said, pointing out that products of countries in the Saudi-led coalition are allowed to enter Yemen quickly.

Ahmed al-Mukhtafi, a Yemeni journalist based in Sanaa, said he believes Saudi and Emirati products are readily available by design.

“Our entry points are completely controlled by Saudi Arabia and the United Arab Emirates, especially land entry points. They don’t allow entry of products that are not Saudi or Emirati,” he said.

“This is so obvious because, before the ‘aggression,’ products from different countries were available. Now, there is no way.”

Many Yemenis like Mukhtafi want to buy pasta, soup and samosas during Ramadan, but find it challenging to find or buy alternatives to Saudi or Emirati products.

“For example, a local alternative for the foreign macaroni product is available, but it is worse than the foreign product and its price is higher. This is a problem,” Mukhtafi said.

“Local products are what we should encourage because they support the national economy in during the crisis and conflict,” Saif, who is also a financial expert, said.

Buying local is exactly what Um Daisam, a Yemeni mother out shopping for ingredients to prepare for Ramadan, said she will do.

“It’s economically preferable to purchase local products generally,” she said. That’s because local products are priced in Yemeni riyal, not in US dollars or Saudi riyals, the use of which drives up the exchange rate and leads to the devaluation of the local currency.

“The presence of the local factory protects the country and the economy, but flooding the markets with non-national products I think is not a good idea, and always makes us in need of hard currency,” Saif, the economic expert, explained.

“The local products remain close to us and lead to the support of the national economy.”