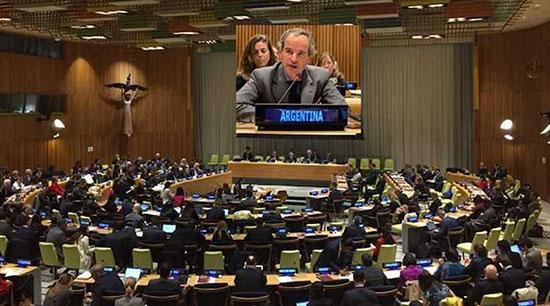 “We have a lot of work to do, especially since next year is the 50th anniversary of the NPT,” Malaysian Ambassador Syed Mohamad Hasrin Aidid, who chaired the preparatory committee (PrepCoM) sessions, which concluded May 10, told the mayors of Hiroshima and Nagasaki on the sidelines of the  PrepCom.

The Trump administration’s hardline position against multilateral treaties has been reflected in the U.S. withdrawal from three arms agreements so far:  the 2015 multilateral nuclear agreement with Iran, the 1987 Intermediate-Range Nuclear Forces (INF) Treaty with Russia and the most recent un-signing of the 2013 international Arms Trade Treaty (ATT).

The NPT Review Conference is held every five years since the treaty went into force in 1970. According to the UN Office for Disarmament Affairs (UNODA), the 2005 and 2015 Review Conferences were unable to reach agreement on any substantive outcome documents.

Dr Rebecca Johnson, founder of the Acronym Institute for Disarmament Diplomacy and author of “Unfinished Business”, told IDN “while the PrepCom went better than expected, the real questions for 2020 are not about the review conference procedures but about the treaties under threat, mainly from the short-sightedeness of Trump and his officials who prioritise narrow nationalistic wish lists above collective international security, and who prefer unilateral threats to international legal agreements.”

In the run-up to 2020, she argued, “we need to bring into force the new UN Treaty that prohibits nuclear weapons use, production and deployment for everyone, and strengthen all aspects of the international security regimes that we need to protect humanity from nuclear and climate catastrophes that are looming over us.”

Dr Johnson also pointed out that the recently-concluded NPT PrepCom was better than many had feared, thanks to the calm and effective chairing of Malaysia’s Ambassador Hasrin.

“He managed to bypass various problems to adopt the main procedural issues, including agreement to designate Argentina’s Ambassador Rafael Grossi as president of next year’s 2020 Review Conference.”

She added that it had surprised no-one that the PrepCom ended without getting consensus agreement on issue-based recommendation – “in light of the deep divisions caused by the U.S. and Russia suspending the INF Treaty, the U.S. trying to wreck the JCPOA that was meant to constrain Iran’s nuclear programme, as well as Syria, North Korea and other real world problems”

“A lot can happen in a year, negative and positive,” declared Dr Johnson, who also serves on the International Panel on Fissile Materials (IPFM) and International Steering Group (ISG) of the International Campaign to Abolish Nuclear Weapons (ICAN), following several years as ICAN Co-Chair and first President of ICAN Europe-Middle-East-Africa (EMEA).

“We have to use this year to put human security above narrow nationalist interests and reinforce local and global action to prevent the twin humanitarian disasters of climate destruction and nuclear war.”

Dr Tarja Cronberg, Distinquished Associate Fellow, at the Stockholm International Peace Research Institute (SIPRI), told IDN the NPT is a treaty designed by the U.S. (and the Soviet Union) in the 1960´s.

Although the treaty requires nuclear disarmament, it gives the right to five states to maintain nuclear weapons at the same time, as it prevents other states from accessing these weapons, she said.

As both the right to have nuclear weapons – and to prevent proliferation – are in the fundamental interest of the U.S., it is hard to imagine that the Trump administration would use “the wrecking ball” at the 2020 NPT Review Conference.

On the contrary, it is in the U.S. interests that the conference ends with a consensus document supporting the NPT, said Dr Cronberg.

Furthermore, opposed to other treaties the U.S. is withdrawing from, such as the Arms Trade Treaty and the INF-treaty – both of which limit U.S. freedom of action – the NPT treaty empowers the U.S., both to keep its own arms and at the same time provides a platform to the U.S. to prevent others, especially Iran and North Korea from possessing nuclear weapons, she argued.

“In this very case the U.S. would be expected to, not to oppose the multilateral character of the NPT-treaty, but to support it.”

“The situation is, however, challenged by the JCPOA, a multilateral agreement preventing Iran from manufacturing nuclear weapons. If this agreement, supported by the remaining partners after the U.S. exit in 2018, collapses before the 2020 conference, this will undermine the NPT,” she added.

Furthermore, if as a result, Iran would leave the NPT (today not a likely alternative) this could challenge the very existence of the NPT. In this case the U.S. would indirectly be responsible for wrecking the NPT, she noted.

Dr Cronberg also said the 2019 Prep Com that just finished in New York brought the long-term frustration built into the NPT between those who want the disarmament pillar strengthened and those that see the NPT only as a non-proliferation treaty into the open.

“Empowered by the new Treaty on the Prohibition of Nuclear Weapons, the majority of the non-nuclear weapon states had a major influence on the chair’s recommendations for the 2020 conference. Opposed by the nuclear weapon states, particularly the U.S. and its allies, this confirms the polarisation of the current nuclear order.”

Unless the nuclear weapon states succeed in agreeing on disarmament measures that could form a basis for a compromise at the NPT 2020, the conference will be as divided as the Prep Com, she predicted.

Nevertheless, as the Review Conference is the 50th birthday of the NPT, there will be strong pressure to achieve a final consensus document, however thin, praising the treaty for its achievements, Dr Cronberg declared.

Meanwhile, at a press briefing in Sochi, Russia on May 14, and in the presence of Pompeo, Russian Foreign Minister Sergey Lavrov said: “I hope that we’ll be able to come up with specifics of ways how to get U.S.-Russian relations out of that regrettable state that they happen to be, due to several objective and subjective reasons involved, considering that this is the task, the instructions coming from our presidents that was confirmed during the Helsinki summit, as well as in their conversation on the 3rd of May.”

He said both the US and Russia have multiple issues that require both urgent methods as well as long-term, sustainable solutions.

“That has to do with the situation in strategic stability sphere, as well as more efficient ways to tackle terrorism, as well as finding solutions to different clashes in different regions of the world.”

He added: “We see that there are certain suspicions and prejudice on both sides, but this is not a way for – have a win-win situation because that mistrust that we have hinders both your security and our security, and causes concern around the world.”

“I believe that it is time to build new, more constructive and responsible metrics of our relationship, of our mutual perception, and we are prepared to do that if our U.S. colleagues and counterparts readily support that.”

“I believe that a requisite – an important requisite for success of our dialogue is to rebuild trust at all levels of our dialogue – in the highest level, at the working level, (inaudible). And considering that we have met over the past two weeks for two times, that’s a reason for some optimism.”

“Let’s try it and see what happens,” declared Lavrov.

According to the UN Office for Disarmament Affairs, the NPT is a landmark international treaty whose objective is to prevent the spread of nuclear weapons and weapons technology, to promote cooperation in the peaceful uses of nuclear energy and to further the goal of achieving nuclear disarmament and general and complete disarmament.

The Treaty represents the only binding commitment in a multilateral treaty to the goal of disarmament by the nuclear-weapon States. Opened for signature in 1968, the Treaty entered into force in 1970.

On May 11, 1995, the Treaty was extended indefinitely. A total of 191 States have joined the Treaty, including the five nuclear-weapon States. More countries have ratified the NPT than any other arms limitation and disarmament agreement, a testament to the Treaty’s significance.