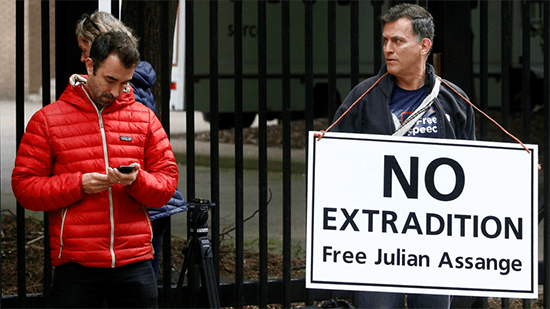 Prosecutors in Sweden have asked the courts to detain Julian Assange in his absence as part of an investigation into rape allegations. If the request is accepted, Sweden will issue an arrest warrant for the Wikileaks founders.

In an announcement on Monday morning the deputy director of public prosecutions in Sweden said that she had requested the District Court to detain Assange in his absence, “on probable cause suspected for rape (less serious crime). If the court decides to detain him, I will issue a European Arrest Warrant concerning surrender to Sweden.”

The prosecutor, Eva-Marie Persson, added that if there is a conflict between a European arrest warrant and a request for extradition from the US, it would be up to UK authorities to decide where Assange would be sent after he finishes his current prison sentence.

“The outcome of this process is impossible to predict. However, in my view the Swedish case can proceed concurrently with the proceedings in the UK,” she said.

The Wikileaks founder is currently serving a 50-week prison sentence in the UK after he was arrested at the Ecuadorian Embassy, where he had sought political asylum for nearly seven years. The Wikileaks founder was found guilty of jumping bail, and may still face extradition to the United States or Sweden.

Two women accused Assange of sexual assault during a visit he made to Sweden in August 2010. Swedish prosecutors reopened the case after Assange’s arrest last month.