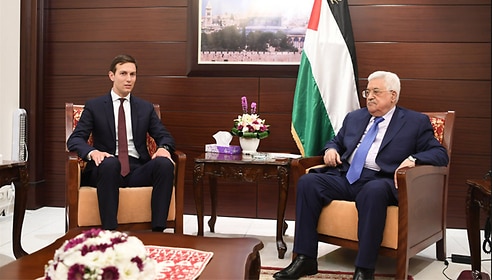 Economic part of plan, which will focus on ways to promote Palestinian economy, will be made public before political component, which is still under discussion

US President Donald Trump’s administration plans to to release the economic portion of its Middle East peace plan in late June in Bahrain, the White House said in a statement on Sunday.

The economic part of the plan, which will focus on ways to promote the Palestinian economy, will be made public before the political component, which is still under discussion, Haaretz reported.

According to CNN, the economic plan will have four major components: infrastructure, industry, empowering and investing in people, and governance reforms “to make the area as investible as possible.”

The 25-26 June conference in Manama, entitled “Peace to Prosperity” and billed as an international economic “workshop”, will bring together government and business leaders to help jump-start the economic portion of the broader US peace initiative, which is also expected to include proposals for resolving thorny political issues at the heart of the decades-old Israeli-Palestinian conflict, Reuters said.

Israel’s Finance Minister Moshe Kahlon is expected to head the Israeli delegation to the summit, Haaretz said. The Palestinian Authority, which has had no official contacts with the Trump administration since it moved the US Embassy to Jerusalem last year, is expected to boycott the initiative.

“Our position is clear: We will neither participate in the economic segment nor in the political segment of this deal,” said PLO senior official Wasel Abu Youssef.

Trump has touted the forthcoming plan as the “deal of the century”, but Palestinian officials have rebuked the US effort, which they believe will be heavily biased in favour of Israel.

Trump’s Middle East team, led by his son-in-law Jared Kushner and regional envoy Jason Greenblatt, seems focused on the potential economic benefits, despite scepticism that they can succeed where decades of US-backed efforts have failed.

“This will give hopefully the people in the region the potential to see what the economic opportunities could be if we can work out political issues that have held back the region for a long, long time,” a senior Trump administration official told Haaretz.

The official said the plan includes significant investments in the economy of Gaza, which would require a “stable” ceasefire agreement to remain in place. “There’s a tremendous amount of opportunity, the world is willing to step up and work on this,” the official said. “But that only happens if we can resolve some of the political issues. The two things go hand in hand. There is a real future that can be very exciting, but we have to work on these hard issues.”

The Trump administration has sought to enlist support from Arab governments. The plan is likely to call for billions of dollars in financial backing for the Palestinians, mostly from oil-rich Gulf states, according to people informed about the discussions.

Saudi Arabia has assured Arab allies it would not endorse any US plan that fails to meet key Palestinian concerns.

Few details of the plan have previously been made public, but it has been widely reported that its political component will not include an independent Palestinian state, Haaretz said. Kushner hinted last month that it may include limited autonomy for Palestinians. Kushner said past negotiations over a two-state solution have “failed. New and different ways to reach peace must be tried.”

A senior US diplomat working on the deal told Middle East Eye earlier this month that the Israeli military would retain control over settlements, the Jordan Valley and borders for five years as final status negotiations continue,

The plan, as described by the official, would cement the status quo between Israelis and Palestinians, with the only concession asked of the Israelis to be freezing settlement building in the heart of the West Bank during the initial five-year period.

According to the plan, Gaza would be under the control of the Palestinian Authority and Hamas would be expected to hand its weapons over to the PA, which would continue to cooperate with Israel on security.

Still, it was not clear what would happen at the end of the five-year period or what the consequences would be if Hamas refused to give up its weapons.

The Palestinians have pre-emptively rejected any peace proposal by the Trump administration amid concerns it will fall short of their hopes for an independent state.

Palestinian Authority Prime Minister Mohammad Shtayyeh earlier this month dismissed the deal as an “Israeli plan written by American hands” that would give Israel “a free hand to annex most of the West Bank under the title of security”.

The Palestinian demand for a two-state solution is supported by the UN and almost all of its 193 member-states.