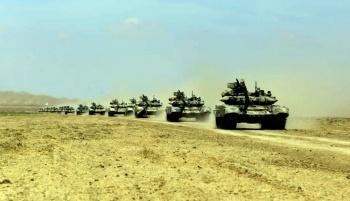 The exercises are conducted under the supervision of Defense Minister Colonel General Zakir Hasanov, in accordance with the plan approved by President of Azerbaijan, Supreme Commander-in-Chief of the Armed Forces Ilham Aliyev.

The main objective of the exercises is to repel the enemy’s attack at night by delivering counterstrikes to the enemy’s positions in various directions and launching the Azerbaijani troops’ offensive operation.

The exercises involve up to 10,000 military personnel, 150 tanks, other armored vehicles, up to 200 rocket and artillery mounts of different caliber, multiple launch rocket systems, mortars, up to 35 aircraft and helicopters.

During the live-fire exercises  held at various training ranges at night, the tasks are performed to organize interoperability among tank, aviation, artillery military units and other combat elements, to use landing and special manoeuvring forces against the enemy, improve management skills, as well as in the field of moral-psychological support of military personnel.

The troops involved in the exercises will carry out all actions, especially at night and in difficult climatic conditions.

The drills will end on May 24.