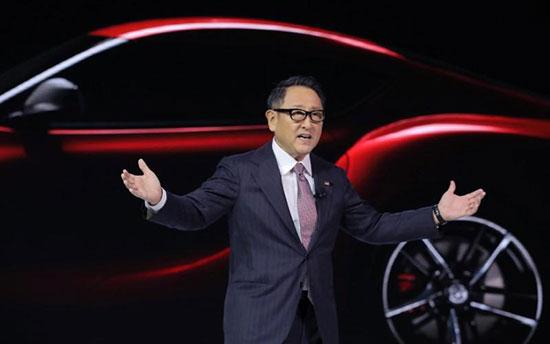 The automaker said it would establish a green-tech research institute with Tsinghua University and provide state-owned BAIC Group’s Foton unit with fuel-cell technology for buses. But before it could feel comfortable unveiling those plans, Toyota put in months of work to pledge fresh investment – in the United States.

The technology transfers represent gestures of goodwill to Beijing by the Japanese automaker, which wants to “step on the accelerator in China” as CEO Akio Toyoda told an internal management group, according to minutes of meetings on March 19 and April 23 viewed by Reuters.

Announcing U.S. investment first was a strategy Toyoda felt the company needed to pursue to avoid U.S. President Donald Trump’s wrath, the minutes showed – providing a rare window into how it has sought to tread carefully as the United States and China battle for investment, jobs and influence in the global economy.

“For Toyota to operate globally, we need to strike a fine balance between China and the United States,” the March 19 minutes quoted Toyoda as saying. “It’s imperative to avoid making enemies.”

According to the April 23 minutes, the Japanese automaker is making what one unnamed senior executive described as a “significant move to steer its focus to China” — a market where it is far behind industry leaders Volkswagen AG and General Motors Co.

Its pivot to China – one that many other global automakers are also making – has been made easier by a thaw in ties between China and Japan but complicated by Trump’s trade policies.

That includes the trade war between Washington and Beijing as well as threats from Trump to impose tariffs of up to 25% on imported cars made by foreign automakers. On Friday, Trump declared that some imported vehicles and parts pose a national security threat, although he delayed a decision for as long as six months on whether to impose tariffs.

In response, Toyota issued one of its strongest messages on potential tariffs to date, calling the designation “a major set-back for American consumers, workers and the auto industry” and saying it sent the message “our investments are not welcomed.”

Toyota has been at pains to show its commitment to the United States, and in the March 19 minutes Toyoda explained a fresh investment of $749 million in U.S. manufacturing capacity and jobs as “an essential” step before it could speed up efforts to expand in China.

Announcing the new investment on March 14, Toyota stressed the sum helped bump up a five-year investment pledge made in 2017 to almost $13 billion from $10 billion. The day following the announcement, Toyoda also spoke before the Economic Club of Washington, declaring: “I love America”.

“I just don’t understand why we are called a national security threat and it pains my heart,” Toyoda said in answer to a question after his speech. “One thing I would promise, no matter what direction the discussion takes us is that Toyota will not leave America.”

Though many other automakers, including U.S. automakers, have announced investments in the United States since Trump came to power in 2017, the near $13 billion pledged by Toyota is the biggest amount by far.

Toyota would have pressed ahead with fresh U.S. investment even without its China plans, but there was much internal planning around how the announcements should be timed, company sources with knowledge of the matter said. The sources, who were not authorized to speak to media, declined to be identified.

In a further sign of Toyota’s careful approach to relations with Washington, board member Ikuro Sugawara was dispatched in April to meet with U.S. Ambassador William Hagerty at the U.S. embassy in Tokyo to give him the heads up that the two China deals would be announced.

“I didn’t think we needed to do that but the Ambassador commended our effort more than I had expected,” the April 23 minutes quoted Sugawara, a former vice minister for trade, as saying.

The U.S. embassy in Tokyo declined to comment on the specifics of the meeting, saying only it was in regular contact with Toyota and many other Japanese firms about their plans to continue investing in the United States.

For many automakers, the U.S. auto market is a key profit center that generates industry-wide sales of about 17 million vehicles annually. But China has rapidly grown in importance – with 28 million vehicles sold in 2018 – and is drawing new investment from global automakers eager to keep up with its heavy promotion of electric cars.

Toyota commands 14% of the U.S. market, but in China it had just 5.3% share last year and the 1.49 million vehicles it sold were less than half the volume sold by VW and GM.

It is aiming to lift sales 10% every year over the next five or six years – roughly equivalent to 3 million cars annually by the mid-2020s, according to a source at a Toyota parts supplier, who declined to be identified as he did not work for the automaker.

Asked about Toyota’s China ambitions, a company spokesman said China was an important market and the automaker was looking at strengthening its base there so that it could propel the business forward.

China has sometimes been a difficult market for Japanese companies due to historical reasons, with sales in 2012 taking a battering in the wake of diplomatic spats over disputed islets known as Diaoyu in China and Senkaku in Japan.

But company sources say Toyota’s pivot has gained steam on the back of an official visit to Japan in May last year by Chinese Premier Li Keqiang, during which Toyoda accompanied Li on a tour of Toyota’s facilities on the northern island of Hokkaido.

Since then, Toyota has embarked on an expansion of its manufacturing muscle in China, with plans to add annual production capacity of 120,000 vehicles each at its Tianjin plant and at its Ghangzhou plant.

It is also expanding distribution networks and is sharing technology to promote goodwill among Chinese leaders, Toyota sources have said.

“We have full backing of the Chinese government, but we shouldn’t take it for granted and must continue to make efforts consistently,” the April 23 minutes quoted Toyoda as saying.

In contrast to the automaker’s efforts in the United States, Toyota is content to keep a relatively low profile with regards to its plans in China. Neither the Tianjin nor the Ghangzhou plans were formally announced by Toyota. Investment amounts have also not been disclosed.

Last month a news conference for international media at the Shanghai auto show was canceled – a move that one company source said was the result of a warning by Toyoda to be circumspect when dealing with the media on the topics of tariff hikes or U.S. import quotas.