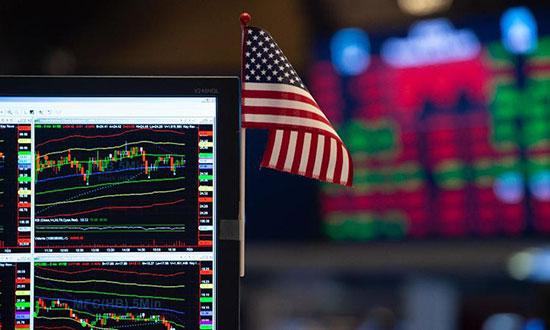 Semiconductor stocks continued to fall in Monday’s New York session, with Qualcomm falling by 6% and Nvidia by 3%, in response to the Trump Administration’s ban on sales to Huawei by American companies.

I don’t think the worst is over. China will retaliate against an unprecedented American action against one of its national champions, and the retaliation might take the form of a global semiconductor price war designed to push American semiconductor designers out of the Asian market where they earn most of their revenues.

The broad US market, meanwhile, is vulnerable to a slowing economy. The Atlanta Federal Reserve’s GDPNow tracking model, which translates current economic reports into a quarterly GDP forecast, projects second-quarter growth at just 1.2%.

That’s only one estimate, to be sure. A similar model published by the New York Federal Reserve Bank, Nowcast, shows growth above 2%. But a large number of economic indicators are pointing downwards.

On Monday morning the Chicago Federal Reserve reported its April National Activity Index at -0.45, against an expected level of 0.2. A reading of -0.45 doesn’t point toward recession, but rather to much slower growth on the order of 2015-2016.

None of the cylinders of the US economy is firing particularly well.

Retail sales are growing at 3% year-on-year in nominal terms, which translates into a gain of less than 1% after inflation. That surprises some analysts, who point to strong readings for the main consumer confidence surveys. In fact, there is only one consumer confidence index that predicts retail sales, and that is the Conference Board’s index of expectations of availability of jobs six months in the future. I pointed to the close relationship between this measure and retail sales in a March 26 analysis and update the chart below.

Capital spending contributed nothing to GDP growth during the first quarter, after deducting “intellectual property” (mainly software). There was no gain in physical plant or equipment. Capital spending data for the S&P 500 confirm the poor reading from the GDP report.