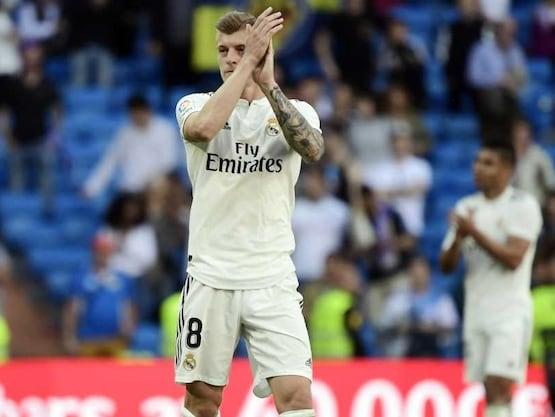 Germany international Toni Kroos has extended his contract with Real Madrid until 2023 ahead of an expected summer overhaul at the club, the Spanish giants said on Monday. The 29-year-old midfielder has won 12 titles in five seasons in Spain, lifting the Champions League trophy in 2016, 2017 and 2018. Toni Kroos has scored 13 goals in 233 appearances for Real since arriving from Bayern Munich in 2014 after helping Germany win the World Cup in Brazil. Real Madrid finished third in La Liga this term, 19 points behind champions Barcelona after registering their lowest points haul in 17 years, ending with a limp 2-0 home defeat to Real Betis on Sunday.

Coach Zinedine Zidane has promised changes to the squad ahead of next season, with Gareth Bale, goalkeeper Keylor Navas, Nacho, Sergio Reguilon, Isco and Marcos Llorente all tipped to leave the club.

Real Madrid delivered a suitably dreadful end to their miserable season, and Gareth Bale was not even given the chance to say a likely goodbye, as Zinedine Zidane’s side were beaten 2-0 at home to Real Betis on Sunday.

Zidane had indicated this could be Bale’s final game ahead of an expected summer departure but the Welshman was left on the bench, made to watch on as three substitutes came on ahead of him at the Santiago Bernabeu.

None were able to revive another dreary and disjointed Madrid performance, which concluded both the season and first phase of Zidane’s much-hailed return as coach.

As the players saluted the fans at the end, they were greeted by a chorus of whistles.

By then, Bale was already off down the tunnel, perhaps aware that any attempt at a farewell could be given an even colder reception.

“I’m sorry, I didn’t give Bale minutes today,” Zidane said. “But I don’t know what’s going to happen, I have to make decisions based on today and the match.”

Zidane will rightly not be held culpable for most of Madrid’s failings this season, including finishing third in La Liga, 18 points behind Barcelona and eight adrift of Atletico Madrid, not to mention crashing out of the Champions League in the last 16.