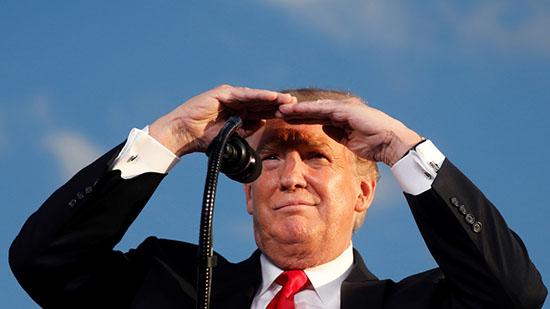 As he continues to trade verbal jabs with Tehran, US President Donald Trump issued a fresh barrage of threats on Monday, vowing to meet any provocation with “great force” while calling Iran the ‘number one provocateur of terror.’

“We’ll see what happens, but they’ve been very hostile, they’ve truly been the number one provocateur,” Trump told reporters as he was departing for a campaign rally in Montoursville, Pennsylvania.

Washington has been “very much involved” in the situation with Iran – cranking up sanctions, sending over its military might and threatening war – “because we are trying to help a lot of people out,” Trump said.

As rhetoric between the US and Iranian governments heated up in the last few days, cautious voices have been pointingout the potentially devastating consequences of an all-out war between the US and the Islamic Republic, and the impact it could have on the region, including war-ravaged Iraq.

While neither of the sides appear to favor that prospect, at least publicly, Trump added fuel to his war-mongering rhetoric, promising to fend off any potential provocation from Iran “with great force.”

However, asked if he had a reason to believe that such a provocation is imminent, Trump admitted that there is nothing to suggest that.

“We have no indication that anything is happening or will happen, but if it does, it will be met, obviously, with great force. We’ll have no choice,” Trump said.

Having earlier on Monday refuted media reports that the US is seeking talks with Iran, Trump insisted that the ball is in Tehran’s court and that it is the Islamic Republic that will have to reach out to the US.

“If they call, we will certainly negotiate, but this is going to be up to them. I only want them to call if they are ready, if they are not ready, they don’t have to bother,” the US president said.

So far, Trump’s persistent threats to annihilate Iran have not encouraged Tehran to sit down for talks.

Responding to Trump’s tweet, in which he professed “the official end of Iran” if it gears up to “fight,” Iranian Foreign Minister Mohammad Javad Zarif said that Trump should “try respect” for a change, invoking historic “aggressors” like Alexander the Great and Genghis Khan, who had failed to conquer Iran.

Iranian Supreme Leader Ayatollah Ali Khamenei has rejected the prospect of negotiations with Washington, saying it would be useless to engage with officials who “don’t abide by anything.”

Trump started his anti-Iran offensive by unilaterally pulling out of the landmark international nuclear deal of 2015, which was brokered by the Obama administration and Russia. As European signatories have been failing to find ways to sidestep the reimposed US sanctions, Tehran has been gradually scaling back its own commitments in response. On Monday, Iran’s Atomic Energy Organization announced that Iran would quadruple its production of enriched uranium and increase the stockpile to 300kg, the maximum quantity allowed under the deal, “within a few weeks.” If the trade issues are not resolved within the next 60 days, Iran said it would start refining uranium to higher levels of enrichment.