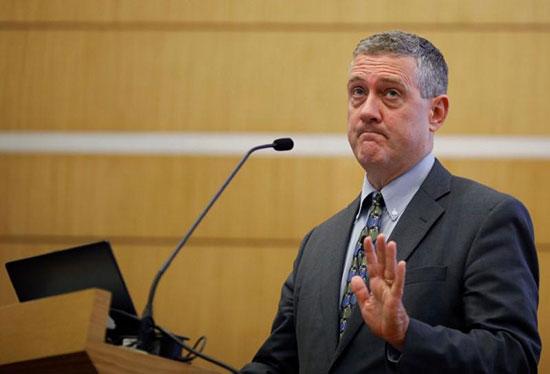 The risk of the Fed missing its 2% inflation target and the trade war were two key macroeconomic challenges to the policy-setting Federal Open Market Committee (FOMC), he said in a presentation prepared for an audience at the Foreign Correspondents’ Club in Hong Kong.

The Fed held interest rates steady earlier in May, when Chairman Jerome Powell said there was “no strong case” for either a cut or hike in interest rates.

But Bullard said on Wednesday “a downward policy rate adjustment even with relatively good real economic performance may help maintain the credibility of the FOMC’s inflation target going forward.”

“A policy rate move of this sort may become a more attractive option if inflation data continue to disappoint,” he said.

Bullard and Chicago Fed’s Charles Evans, both voting members of the FOMC, have in recent days expressed concerns over the Fed’s failure to meet its target. Bullard said on Wednesday that another ‘low-side miss’ is on the horizon in 2019.

Bullard said any policy adjustment going forward would be in response to incoming data, and not a continuation of the rate normalization process which has stopped earlier this year after 225 basis points worth of hikes from near zero levels.

He remained upbeat about growth prospects.

Bullard drew comparisons with 2-1/2 decades ago — when rates were increased by 300 basis points between early 1994 and early 1995, and the economy still boomed during the second half of the 1990s — to stress that rate normalization can be accomplished without damaging prospects for an extended period of growth.

On trade, Bullard expects agreements will be reached in the near term, but warned that a failure to do so, with substantial barriers “erected and maintained,” could alter “global trading patterns over the medium term”.

These unresolved trade disputes and the below-target inflation “suggest that the FOMC needs to tread carefully in order to help sustain the economic expansion,” Bullard said.

The next FOMC meeting will convene on June 18. [FED/DIARY]