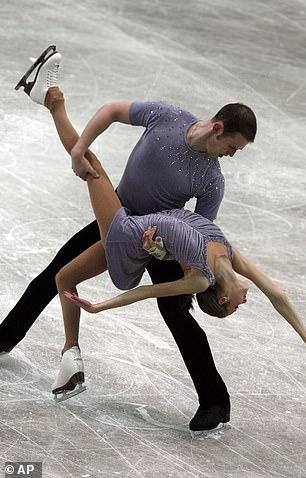 One of the former skating partners of two-time US pairs champion John Coughlin has accused him in a series of Facebook posts of sexually assaulting her over a two-year period.

Coughlin, who killed himself in January, “hurt at least 10 people including me. He sexually abused me for 2 years,” wrote Bridget Namiotka, who skated with Coughlin from 2004, when she was 14, until the 2007 season. Namiotka’s attorney confirmed to the comments were made by his client.

“My office alone represents three women across a generation who really didn’t know each other until they found they had very similar stories, and all of them wanted to keep their privacy because nobody wants to disclose this,” said John Manley, who has represented victims of sexual abuse for more than 25 years. “I think Bridget has courageously said, ‘I’m not going to take it anymore.”’

The U.S. Center for SafeSport and US Figure Skating had begun investigating allegations lodged against Coughlin late last year. They found enough evidence to warrant an interim suspension earlier this year, barring Coughlin – who had become a coach and well-known TV commentator after retiring from skating – from attending activities sanctioned by the US Olympic Committee.

Coughlin, who had maintained his innocence throughout the investigations, was found dead in January at his father’s home in Kansas City, Missouri. He was 33. “I understand his family may not want to believe this, and I’m so sorry for this loss, but he did these things,” Manley said. “It’s not their fault. It’s his fault.”

Three weeks after Coughlin’s death, SafeSport announced it was halting its investigations into Coughlin because its purpose is to “protect the sport and community and other persons from the risk associated with sexual misconduct and abuse.” That risk expired when Coughlin killed himself.

Namiotka now works as a figure skating coach. Manley said the reason she is speaking out is to counter months of “mistreatment by US Figure Skating and Coughlin supporters.” Manley also accused the national governing body of helping to create the impression that the women abused by Coughlin were “crazy and making it up.”

And for the sport, for US Figure Skating, to allow this narrative to come out, how these women are just liars and want money just a bunch of nonsense is no accident,” he said. “It was designed to victim-shame anybody else who might have been hurt by him and to keep them quiet.”

Messages left for US Figure Skating seeking comment were not immediately returned.

“I wish US Figure Skating had extended the sympathy to my clients that they extended to Mr. Coughlin and his family,” Manley said. “There was a process in place that, allowed to play out, justice would have been done. Instead there’s been a false narrative create to protect themselves.”