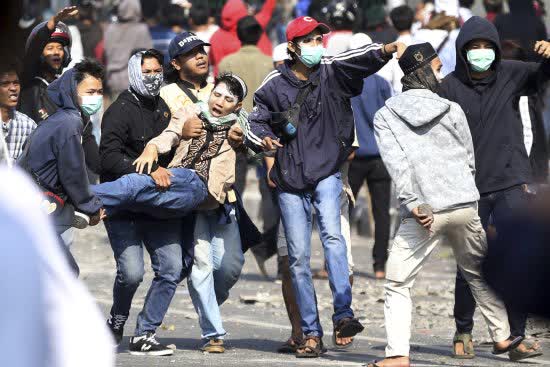 At least six people are dead and more than 200 are injured after protests turned violent following the announcement of Indonesia’s official presidential election results, according to the governor of Jakarta.

Supporters of the main opposition candidate Prabowo Subainto clashed with security forces and set fire to a police dormitory and vehicles in the capital, the Guardian reports. Prabowo, a former general, lost the election to incumbent President Joko Widodo, commonly known as Jokowi, but he has refuted the results since quick count results showed that Jokowi won the April election.

Prabowo said Tuesday that he will challenge the election results in the country’s courts.

Dedi Prasetyo, a National Police spokesman, said protests turned violent late Tuesday and that police arrested 20 “provocateurs,” reports the Guardian. He stressed that police did not have live bullets. The city’s police spokesman said tear gas and water cannons were being used against protestors attacking with weapons such as rocks and molotov cocktails, according to the Guardian.

The Guardian reports that more than 30,000 troops have been deployed to Jakarta, and several governments offices, schools, shopping centers and businesses have been closed as a precautionary measure.

The country’s security minister says that social media will be blocked in parts of the country due to the protests, but he did not specify which locations would be affected by the restrictions, according to the Associated Press.

Protestors had started gathering outside the election commission building as of Wednesday morning, according to the Guardian.