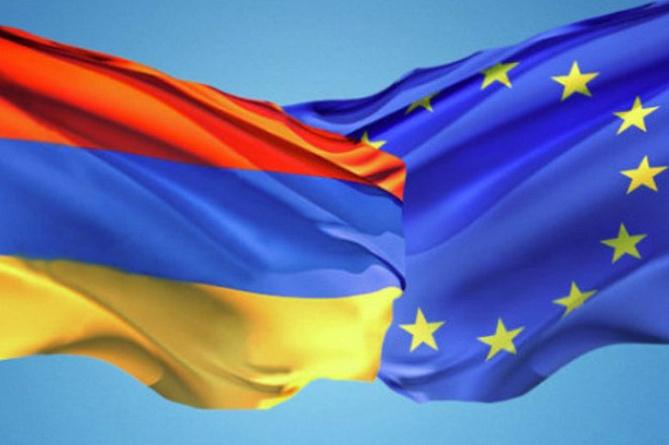 YEREVAN, May 22 / ARKA /. Armenia has stepped up its efforts to reinforce and enhance its partnership with the EU and acknowledged the significant role the EU can play in the smooth implementation of the country’s reform agenda, the European Union said in a report on developments in Armenia and EU-Armenia relations between June 2018 and early May 2019. The report comes ahead of the EU-Armenia Partnership Council on 13 June.

The EU added, however, that the reform process remains at an early stage. The government’s roadmap for the implementation of the EU-Armenia Comprehensive and Enhanced Partnership Agreement will be an important instrument in advancing reform plans.

“The European Union has been and will continue be the biggest supporter of the Armenian government’s ambitious reform plan, which is consolidating democracy, the rule of law and promoting human rights in the country”, said the High Representative of the Union for Foreign Affairs and Security Policy/Vice-President of the European Commission, Federica Mogherini.

”Armenia is an important partner for the European Union, and together we are focused on implementing our wide-reaching bilateral agreement, as well as delivering concrete results within the Eastern Partnership. We always keep firmly in mind that our aim is bringing tangible benefits to our citizens,” she added.

“The EU and Armenia are strong partners and we stand ready to support concrete reforms, including in the area of justice and education, which are key for the people”, said the Commissioner for European Neighborhood Policy and Enlargement Negotiations, Johannes Hahn.

After the political changes in Armenia last year, early parliamentary elections were held in December 2018. The EU was the largest single contributor to the elections, providing technical equipment and supporting actions in favour of democracy and civic participation. According to the International Elections Observation Mission, the elections respected fundamental freedoms and enjoyed broad public trust. In addition, the Government highlighted the need for independence, accountability and efficiency of the judiciary.

In September 2018, the EU and Armenia launched the EU-Armenia Strategic Policy Dialogue in the Justice Sector. The EU stands ready to support reform in this crucial field. Total EU-Armenia trade increased by 15% over the past year reaching a total value of €1.1 billion. Armenia benefits from the EU’s Generalized Scheme of Preferences plus (GSP+), which is a special incentive arrangement for sustainable development and good governance. More than 96% of EU imports eligible for GSP+ preferences from Armenia entered the EU with zero duties in 2017.

The extension of the core Trans European Transport Network (TEN-T) to Armenia was finalized in November 2018. The Indicative TEN-T Investment Action Plan was published in January 2019 and also includes road safety as one of its priorities. An EU-Armenia Education Policy Dialogue was inaugurated in March 2019 to support the reform in the education sector.

Thanks to the support of the Erasmus+ capacity building projects, Armenian universities have been able to upgrade their administrative and organizational structures and modernize study courses. More than 2,700 students and university professors have benefited from EUArmenia academic exchanges and mobility projects through Erasmus+ since 2015.

At the end of 2018, a new ‘EU4Innovation’ programme worth €23 million was launched aimed at matching the skills of university graduates with the requirements of the labour market. The programme will create a EU4Innovation Centre for universities and an EU Convergence Centre to bring together universities and private sector, complemented by an incubator for technology start-ups.

The EU is the biggest provider of financial support and a key reform partner in Armenia. The EU stands ready to continue engaging in Armenia and provide support through political dialogue, financial and technical assistance, to support the Armenian government ambitious reforms for the benefit of the citizens of Armenia and EU-Armenia cooperation.

Armenia is the only member country of the Russia-led Eurasian Economic Union to sign CEPA with the European Union. The agreement will fully enter into force upon ratification by all 28 EU member states and Armenia. Currently, the document has been ratified by Armenia, Estonia, Latvia, Lithuania, Bulgaria, Poland, Denmark, Romania, Luxembourg, Denmark, Malta, Germany and the United Kingdom.

The objectives of the agreement is to strengthen dialogue between Armenia and EU in all areas of mutual interest by developing close relations, supporting the strengthening of democracy and political, economic and institutional stability in Armenia, as well as expanding cooperation in trade.