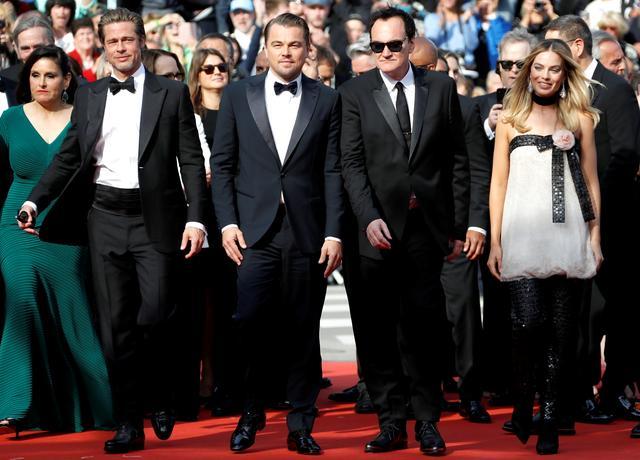 CANNES, France (Reuters) – With Hollywood stars Leonardo DiCaprio and Brad Pitt in tow, Quentin Tarantino unveiled his latest opus in Cannes on Tuesday, a story about movie magic and acting pains that wowed many critics – at least in parts.

Set in the late 1960s, when spaghetti westerns ruled the screen, “Once Upon A Time in Hollywood” was one of the most hotly anticipated premieres at the film showcase – not least because it only made it to the competition at the last minute.

Tarantino, a Cannes darling, won the festival’s top Palme D’Or prize for “Pulp Fiction” 25 years ago, and his latest offering is not short of big names, with Australian actress Margot Robbie and Al Pacino also in the line-up.

Centered on Ricky Dalton, a TV actor wracked by self-doubt played by DiCaprio, the film is a love letter to the world of cinema, from its glamorous parties to the highs and lows of being on set.

Dalton and stunt double Cliff Booth, played by Pitt, roam the studios of Hollywood, pondering their careers and getting into scraps, running into hippies and martial arts stars.

Ominously, however, it also takes place in the run-up to the notorious Mason murders – the gruesome killings orchestrated by cult leader Charles Manson, which claimed the life of pregnant actress Sharon Tate, married at the time to filmmaker Roman Polanski.

The film’s evocative atmosphere, flashes of violence that Tarantino is known for, and darkly comic moments elicited some early rave reviews following the premiere.

In a message sent out on social media by the movie’s promoters ahead of the premiere, Tarantino asked the media and those at the premiere not to ruin the film, his ninth, with any spoilers.

“The cast and crew have worked hard to create something original,” the director said. “I only ask that everyone avoids revealing anything that would prevent later audiences from experiencing the film in the same way.”

Some critics highlighted the movie’s patchier, more self-indulgent moments, but they still found enough to like in show-stealing scenes and strong performances by DiCaprio and Pitt in particular.

Entertainment site TheWrap called it “big, brash, ridiculous, too long, and in the end invigorating.”

“It’s fun but … it’s too long for a small story in fact,” Joachim Lepastier, a journalist from France’s Cahiers Du Cinema, told Reuters after leaving a screening.

Tarantino, who arrived on the French Riviera last week and has been spotted at several screenings and premieres, hit the red carpet on Tuesday alongside his wife, Israeli singer and model Daniela Pick, who also has a role in the film.

DiCaprio, Pitt and Robbie also put in star turns on the Croisette at the glitzy premiere.

The Cannes Film Festival runs until May 25. Tarantino is vying for the top award alongside veteran filmmakers like Britain’s Ken Loach or Spain’s Pedro Almodovar, and newer ones including French promise Celine Sciamma.