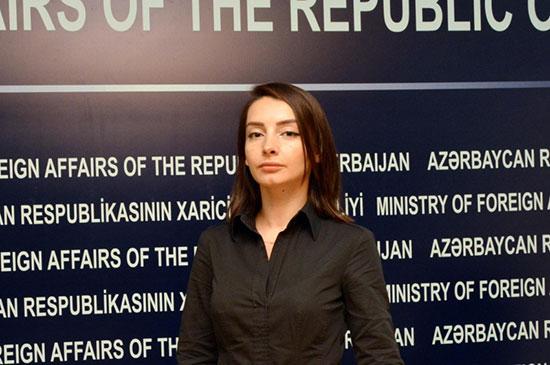 Baku / 23.05.19 / Turan: Press Secretary of the Foreign Ministry of Azerbaijan Leyla Abdullayeva commented on the statements of the Armenian Foreign Ministry regarding the refusal of the footballer of the British FC Arsenal to come to Baku for the Europa League final.

“Azerbaijan has given guarantees that it will fully ensure the safety of all players who will participate in the final game of the UEFA Europa League in Baku on May 29 of this year, including G. Mkhitaryan, player of the Arsenal football club, as well as all the fans,” said Abdullaeva.

“I personally, as a representative of the Ministry of Foreign Affairs, have repeatedly stated that Azerbaijan does not identify sport with politics. Azerbaijan has hosted significant sporting events for many times; many sports competitions have been held so far in the country’s capital, including the participation of athletes of Armenian origin.

Alas, this step clearly demonstrated that Armenia is not focused on preparing its people for peace, as stated by the co-chairs of the Minsk Group. Unfortunately, Armenia uses a player of FC Arsenal of Armenian origin for its provocative purposes. It also demonstrated that first of all it is the Armenian people who need to be prepared for peace. It is incredible and absurd that Armenia, a mono-ethnic country that has conducted ethnic cleansing in the occupied territories of Azerbaijan, accuses Azerbaijan of racism. The coexistence of various religious and ethnic groups in an atmosphere of peace and tolerance in Azerbaijan is well known to the whole world,” said the representative of the Ministry of Foreign Affairs of Azerbaijan.