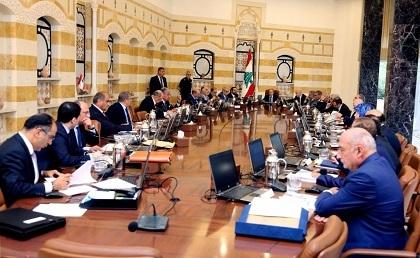 The Cabinet on Wednesday failed anew to finalize the 2019 state budget and will hold another session on Friday to continue the discussions.

“Everyone agreed that Friday’s session will be the last,” Sport and Youth Minister Mohammed Fneish told reporters after the session.

TV networks said the session witnessed “heated discussions over what some ministers described as time waste in discussing and approving the state budget.”

LBCI TV said Prime Minister Saad Hariri ended the session “after finding difficulty in reaching an agreement on the budget.”

“He is expected to hold consultations before Friday’s session in an attempt to secure consensus,” LBCI added.

Information Minister Jamal al-Jarrah said new proposals were raised during the session, prompting Hariri to give the ministers a 48-hour timeframe to study them.

The TV network said Bassil maintained his insistence on his stance despite attempts to persuade him to soften it, which “dismayed Hariri.”

MTV meanwhile said Bassil wants to cut the budgets of some ministries, including the social affairs ministry.

A ministerial meeting was held ahead of Wednesday’s session in a bid to overcome obstacles and pacify the rhetoric among some parties.

Bassil had said during Tuesday’s session that the FPM was “not satisfied with the result.”

“This is worse than what we were expecting and a 7.6% reduction in deficit is not sufficient,” he added.

The Cabinet has held around 17 sessions to finalize the budget and several parties have accused Bassil of hindering the discussions with side proposals.

Lebanon has vowed to slash public spending to unlock $11 billion worth of aid pledged by international donors during an April 2018 conference in Paris.

Last month, Hariri vowed to introduce “the most austere budget in Lebanon’s history” to combat the country’s bulging fiscal deficit, sparking fears among public sector employees that their salaries may be cut.

Lebanon is one of the world’s most indebted countries, with public debt estimated at 141 percent of GDP in 2018, according to credit ratings agency Moody’s.