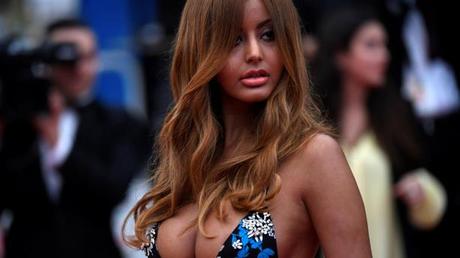 She is notorious as the under-age escort at the heart of a scandal that shook the French football team, but Zahia Dehar has confounded her critics with a startling big screen debut at the Cannes film festival.

The former escort who was allegedly paid for sex by French football stars Franck Ribery and Karim Benzema in 2009 when she was still 17, was hailed as the “main power source” in the acclaimed French film “An Easy Girl”.

Algerian-born Dehar — who is known in France simply as Zahia — has since traded her trashy reputation for social media fame and her own lingerie brand.

But “Easy Girl” — whose title plays on Zahia’s sulphurous celebrity — reveals impressive acting talent way beyond red carpet and photocall pouting which makes her a regular in gossip magazines.

The Hollywood Reporter compared her to 1960s French screen siren Brigitte Bardot, with one scene on a beach echoing the opening of Jean-Luc Godard’s classic, “Contempt”.

Zahia, now 27, told AFP she wasn’t in the slightest worried that people would draw parallels between the party-girl character she plays and her own life.

In the film, she leads her more innocent 16-year-old cousin into a gilded but cynically transactional world of yachts and flashy restaurants on the French Riviera.

Director Rebecca Zlotowski shot the ode to sexual and political awakening last summer in Cannes, and Zahia said she “didn’t agonise at all about what Rebecca was trying to do”.

Zlotowski is one of a wave of rising French female directors, who scored a hit with “Grand Central” with her pairing of “Bond” star Lea Seydoux and Tahar Rahim from “A Prophet” hailed as “generating off-the-scale sexual electricity”.

“When I discovered the story of my character I was really excited,” Zahia said, “because I love free spirits who resist (society’s) expectations.”

It was “really liberating to see women on screen play against stereotypes”, she said, insisting the film was deeply feminist.

In fact, Zahia argued that the movie may help to reclaim the insult “easy girl” which had been thrown at women for centuries.

“Easy girl isn’t pejorative, for me it’s extremely positive, it’s a woman who is at ease with her sexuality and is the equal of a man.

“It’s a term that was invented by society to imprison women,” she said.

Critic Wendy Ide of Screen hailed the “laser-focused pursuit of conspicuous consumption and good times” Zahia brought to the role, “a cartoon nymphet dripping with labels and lazy sensuality” who has “rejected emotion in favour of sensation, adventure” and Instagram cred.

The Hollywood Reporter was equally laudatory, calling her “a glamazon with a good heart”, and calling the film “by far (Zlotowski’s) best”.

Frosch said it was “brisk, frisky and atmospheric, but with an emotional undertow — a luminous wisdom and wistfulness that catch you off guard.”

Zlotowski said Zahia was a perfect choice for her “amorality tale”, and that she had “great sympathy for women who have been dragged through the mud”.

“I associate Zahia’s journey with breaking social boundaries, with beauty and her Arabness,” she added.

The filmmaker said that at a time when women were putting more of their own stories on screen, she “took great pleasure in also daring to show women who live in the cliche of hyper-femininity.

“You don’t need to be a feminist today to show women as astronauts and neurosurgeons,” she said.