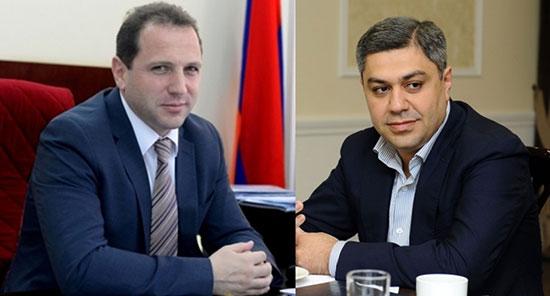 Chief of Armenia’s National Security Service Artur Vanetsyan and Defense Minister David Tonoyan enjoy the highest rating among Government officials, according to a new survey conducted by MPG Group, an exclusive representative of the GALLUP International Association in Armenia.

They are followed by Police Chief Valeriy Osipyan and Minister of Labor and Social Affairs Zaruhi Batoyan. The overall rating of the government has declied from 92% to 82%.

The survey was conducted among 1,108 citizens across Armenia in the form of face-to-face interviews between April 30 and May 9.

According to Arman Navasardyan, Director of MPG Group, the decline could be linked to “weakened euphoria” and higher expectations from the government.

Meanwhile, 23.7 percent of respondents say the government will be able to improve the country’s economic situation by taking tangible steps, 31.3 % believe pensions and salaries will be raised while taxes will be reduced. 28.3 percent believe all businessmen will be brought to the legal field, 11.6 % say the government will not be able to achieve any tangible success in the coming year.

An overwhelming majority of respondents (75.8%) say reforms in the field of fight against corruption have been the most successful over the past year. Reforms in the healthcare and ecology have also been positively assessed with 57.5% and 47.9% respectively.