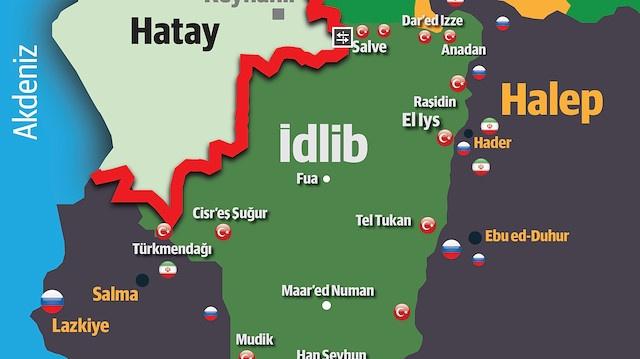 Speaking Exclusively to Yeni Şafak daily, al-Assaad said the “joint mission” assigned to foreign agents from countries such as the U.S., Russia and Iran, is to ‘increase hostilities against Turkey’

There are over 400 intelligence agents affiliated with numerous foreign countries operating in Syria’s Idlib who are tasked with inciting the province’s population against Turkey, said the founding commander of the Free Syrian Army.

Speaking Exclusively to Yeni Şafak daily, Commander Riyad al-Assaad said the “joint mission” assigned to all these foreign agents from countries such as the U.S., Russia and Iran, among others, is to “increase hostilities against Turkey.”

“There’s a conspiracy against Turkey in Idlib. Despite a diplomatic process being in place, Russia has been continuing its violent bombardment for five months. A ground operation was launched afterwards as part of the strategy to ramp up pressure on Turkey and corner it. Iran and Russia have different agendas than the ones they discuss with Turkey at the diplomacy table,” said Al-Assaad.

“The words and actions of the Putin administration are not consistent,” continued Al-Assaad.

The attacks targeted the towns of Maarat Al-Numan and Maarat Herma in the Idlib province, the sources said.

Also, regime forces and Iran-back militias shelled the town of Khan Sheykhun and the villages of Al-Kassabiyya, Abdin, Karasaa, Kafr Sajna and Al-Naqeer bringing the number of people who have lost their lives in Idlib since April 25 to 455.

Addressing the gains made by the Assad regime in southern Idlib, Al-Assaad pointed that the day the town of Qalaat al-Madiq was seized by the regime and its allies coincided with the presence of Russian generals on the ground.

“Now it’s al-Bab’s turn. Russia and Iran’s approach in the region is clear. For both of them, the FSA represents a much bigger threat than Hayat Tahrir al-Sham, continued Al-Assaad.”

“Russia and the U.S. have reached an agreement. They want all of Syria save for PKK regions,” concluded the FSA commander.

Some 1.5 million people currently reside in Idlib, half are displaced from other parts of the war-torn country.

Turkey and Russia agreed last September to turn Idlib into a de-escalation zone in which acts of aggression would be expressly prohibited.

The Syrian regime, however, has consistently broken the terms of the cease-fire, launching frequent attacks inside the de-escalation zone.

Syria has only just begun to emerge from a devastating conflict that began in early 2011 when the Bashar al-Assad regime cracked down on demonstrators with unexpected severity.