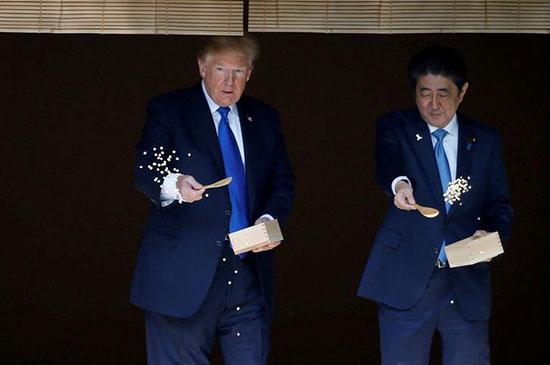 Japanese Prime Minister Shinzo Abe will treat U.S. President Donald Trump to an imperial banquet, front row seats at a sumo tournament and a trip to the country’s biggest warship on a state visit as Tokyo seeks to avoid a bust-up over trade.

New Japanese Emperor Naruhito and Harvard-educated Empress Masako will host a lavish dinner for Trump during his stay from May 25 through May 28, part of a display meant to showcase the two countries’ alliance.

The U.S. leader will become the first foreign dignitary to be so honored since the monarch inherited the throne this month. Trump will also play golf with Abe and inspect Japan’s Kaga helicopter carrier.

At their summit on Monday, Trump and Abe are expected to discuss topics from North Korea’s nuclear and missile programs and China’s economic and military rise to two-way trade at a time when Washington is embroiled in a trade war with Beijing.

“Various issues will come up during President Trump’s visit but I don’t think they will be so severe,” Kenji Wakamiya, chairman of the lower house foreign affairs committee, told a Reuters News seminar this week. “I don’t think (demands) will be as harsh as toward China.”

Abe has made forging close personal ties with Trump a top priority and the two have bonded on the links, over burgers and with frequent telephone calls and face-to-face meetings.

“What Prime Minister Abe has done was quite effective and you can even say strategic, because for Mr Trump, personal chemistry is quite important.”

Designating Trump’s stay in Tokyo as an official state visit means that it is by definition supposed to be a success, said former diplomat Kunihiko Miyake, research director at the Canon Institute for Global Studies.

Trump has nonetheless made clear he is unhappy with Japan’s$68-billion trade surplus with the United States, much of it from auto exports, and wants a two-way deal to tackle it.

Japan’s trade surplus with the United States rose 17.7% in April from a year earlier, to 723.2 billion yen ($6.6 billion), driven partly by an increase of 8.3% in auto exports, data showed this week.

Last Friday, Trump declared some imported vehicles and parts posed a national security threat but delayed a decision on imposing tariffs for as long as six months, allowing more time for trade talks with Japan and the European Union.

Japan says it opposes limits on its exports, a violation of world trade rules.

“We are not in the 1980s or 1990s,” Miyake said, referring to the era of Japan’s “voluntary” restraints on auto exports to the United States. “It’s a non-starter.”

U.S. Trade Representative Robert Lighthizer, who leads the talks for Washington, will visit Japan from Friday to meet Economy Minister Toshimitsu Motegi before the summit, two sources with direct knowledge of the plan said.

Trump pressed Abe for Japanese automakers to turn out more vehicles in the United States at a meeting in Washington last month, according to U.S. Ambassador William Hagerty – a move Wakamiya said could be an option.

Trump said at the time that a trade deal was possible by his May visit and told a campaign rally last month that Abe had said Japan would invest $40 billion in U.S. car factories, a figure that had some Japanese officials scratching their heads.

“I hope we will have significant progress here very, very shortly,” Hagerty said this week.