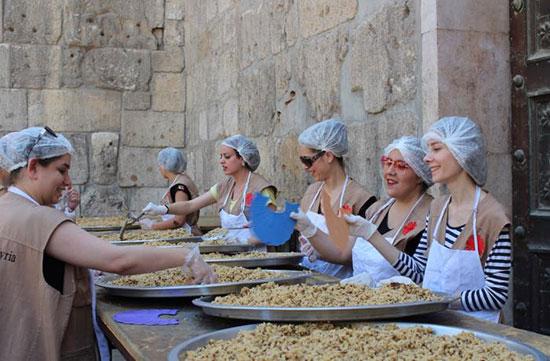 According to UN sources, 83 per cent of the population lives below the poverty line. Although produce is back on market stalls, people have to be thrifty and cut expenses for Iftar. Caritas Syria is helping out with the evening meal for the poorest families.

Damascus (AsiaNews) – This year’s Ramadan is low-key due to rising prices and widespread poverty, caused by more than eight years of war and exacerbated by the US embargo and European sanctions, which have pushed more than 80 per cent of the population below the poverty line.

In this holy month of fasting and prayer, most Syrian Muslims limit themselves to looking at food on market stalls and are satisfied with a frugal Iftar (the evening meal that breaks the fast).

In one of Damascus’s most famous markets, Bab Srijeh, most people just look at the goods and the food; few can buy much. The war has been financially draining for most families and, in spite of reduced prices compared to the past, trade is modest.

“Family and friends used to gather at least six or seven times for the Iftar,” says Abou Anas al-Hijaz, a 45-year-old singer. “At present, I invite them only once, twice at best.”

A woman from the southern suburbs of Damascus, back from one of the smaller markets in the Syrian capital where prices are more affordable, said she replaced peas with beans because they are cheaper. And now the courgettes are stuffed with rice because the price of meat is too high.

The liberation of eastern Ghouta led to renewed farm production and more produce in markets, but most people do not have the money to buy. Some have had to sell their cars to buy food each day.

UN sources report that 83 per cent of the Syrian population currently live below the poverty line because of the war and the US and EU embargo. By comparison, the figure for 2011 was 28 per cent.

US and European punitive measures against Syrian leaders have compounded the economic crisis caused by the war, with the civilian population paying the price.

War along with financial and trade restrictions have killed almost half a million people, permanently disabled more than three million, forcing some 11 million – almost half of the population – to abandon their homes.

Against this background, Caritas Syria has undertaken a number of initiatives for Ramadan to show solidarity with deeds, not just words, to their Muslim brothers and sisters.

“During the holy month, young Caritas Syria volunteers, together with the Sa’ed Society, a Muslim association, participate in the ‘Khasa Al Jou’ campaign by preparing each day meals to be distributed at the end of the day to poorer families, charities and passers-by,” Caritas Syria communication manager Yerado Krikorian told AsiaNews.

“This does not just mean preparing food. It is a humanitarian message,” he explained, “a social and moral duty and we are happy to prepare a fast-breaking meal for needy people and passers-by during the holy month of Ramadan.”