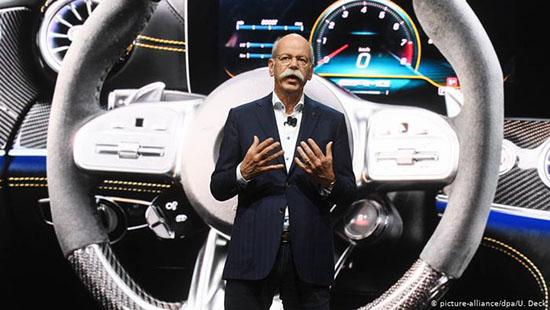 Daimler chief Dieter Zetsche is just the latest to have his retirement pay package highlighted. Though modest by international standards, these payoffs reward mediocrity and must come to an end says DW’s Timothy Rooks.

When CEO pay packages are announced it always causes a stir. There are op-eds, shareholder protests and angry rants on social media. But less attention is paid to these same CEOs once they retire — but still dent the company’s ledgers.

Retired CEOs are no longer in the spotlight and managers, shareholders and journalists are looking forward. It is also often hard to pinpoint the value of the payoffs such as stock options, prorated bonus pay, complicated health and other benefits like use of company cars, security and jets — especially since they depend on how long said CEO lives.

Now Daimler’s Dieter Zetsche is set to retire. After 13 mediocre years as chairman of the German engineering and manufacturing giant, he is stepping down at the annual meeting on May 22 in Berlin.

Looking into the crystal ball

It is impossible to ignore the fact that the company is in trouble. Despite its recognizable name it can’t seem to get a grip on the future of mobility. When Zetsche took over in 2006 its stock was just over €43 ($48) a share. At the beginning of May it was at €58 a share. This may seem like a healthy increase, but when compared to the DAX index, Daimler generally performed in line with the DAX average. But since the beginning of 2016, the DAX has pulled ahead.

In 2018, the company recalled around 800,000 vehicles throughout Europe because of emissions cheating software. In the first quarter of this year, overall sales were down 4% as were revenue and profits.

In April, new emissions cheating software was found in more Mercedes. The fallout from the Dieselgate scandal is still being added up.

On top of that the company seems to have missed the direction of where mobility is headed. Daimler’s vision for autonomous driving, mobility services and battery-powered vehicles looks unclear.The company has started an austerity program and there are rumors of big job losses to come. Daimler is simply no longer a pioneer on the cutting edge of technology.

But Zetsche’s most spectacular failure was his handling of the Chrysler integration into Daimler. Originally labeled a “merger,” Daimler took over the American carmaker in 1998 and Zetsche personally went to Detroit to run it from 2000 until 2005.

It was a massive misfire that cost the German company much more than the $36 billion it spent in the acquisition. The Germans blamed the mess on a lack of synergies, but they themselves were to blame and walked away with nearly nothing. The fact that the US unit could be sold pretty much as an intact whole in 2007 shows that there was no effort made at real integration.

Yet what Zetsche was not able to do, the late Sergio Marchionne was. After bringing Fiat back from the brink, he took on Chrysler. Against all odds — and history — the Italian manager was able to truly combine both leviathans and actually turn them around. In 2017, Fiat Chrysler Automobiles booked €111 billion ($130 billion) in revenue on global sales of 4.7 million vehicles.

Nonetheless, contracts are contracts and Dieter Zetsche was sure to look over his closely before signing on the dotted line. When he retires he will make €4,250 — not a month, but each day — which puts him on track to be the best paid pensioner of a big Germany company, just ahead of VW’s former boss Martin Winterkorn, perhaps not the best company to keep at the moment. In all it’s been reported Zetsche will take home around €42 million.

These German examples though are puny compared to other countries. In 2017, Ford CEO Mark Fields, only on the job since 2014, was fired. During his time the company’s stock had fallen about 37% — a loss of $25 billion in market value — but he still walked away with a reported $57 million in severance pay.

Still, not being the worst offender doesn’t make the German status quo OK. One thing that helps German companies stay in the middle ground when it comes to CEO compensation is not their sense of propriety, but its unique governance system of businesses, a very Teutonic invention.

Its “co-determination” model requires that companies with more than 500 employees give half of the supervisory board seats to workers. And though these workers are in close contact with the company heads, they are loathe to approve huge pay or retirement packages that most employees would see as unfair.

What good do former CEOs do for their former employers anyhow? Would they have performed the same, better or worse if their retirement package was 10% less or even 50% less? These are impossible questions to answer. Yet if all companies paid less and gave less generous retirement packages, the remunerations arms race would slow down. A concentrated global effort is necessary to tackle this problem. CEOs, even in splendid retirement, must be brought back to reality. And more importantly, poor performance must not be rewarded.

One thing, however, is nearly assured. Despite the many editorials about overpaid CEOs and the dire state of Daimler, Dieter Zetsche is not going away. Even with his big retirement package in his pocket he will not be relaxing in the sun for long. He is already planning on coming back in 2021 as chairman of the company’s supervisory board. There he can be part of the committees deciding on the next generation of CEO pay and retirement packages. Some things never change.

US Presidential Election 2020 And Polling The Politicians: Pitfalls And Perils – Analysis