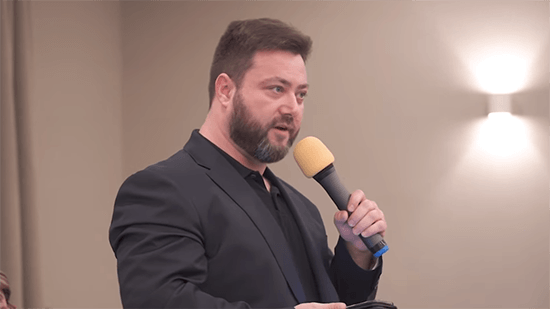 Carl Benjamin, a British candidate to the European Parliament, better known as YouTube star Sargon of Akkad, has reportedly been labelled a ‘hate actor’ by Facebook including for ‘neutral representation’ of a Proud Boys member.

Benjamin’s inclusion on the ‘blacklist’ was reported by Breitbart on Wednesday, with mere hours left until the kickoff of the UK portion of the European elections. Benjamin, mostly known as a prolific political commentator on his YouTube channel ‘Sargon of Akkad,’ stepped into offline politics last year when he joined the UK Independence Party (UKIP) and is now vying for a seat in the European legislature.

According to the excerpts from the internal Facebook document, as cited by Breitbart, the social networking site’s censors are keeping a detailed log on Benjamin’s behavior both on and off the platform, such as voicing support for a member of the right-wing group Proud Boys group or hurling a homophobic slur.

The online snooping is encouraged by Facebook, which allegedly tells its employees to collect various “signals” of individuals’ ‘bad behavior’, even outside the platform. The entries are then used to determine whether the person should be included on the ‘hate agent’ list.

The examples provided by Breitbart show how laboriously Facebook’s thought police documents not only “hate signals” but also takes note of “borderline” content by Benjamin and others. It has a long memory, too, apparently looking at content posted as early as three years into the past. These are “Level Three” signals. “Level Two” and “Level One” signals are, respectively, two and one years old.

Benjamin is on notice for “Level Two” and “Level Three” signals. In one particularly instance, Benjamin is given a black mark for giving a “neutral representation of John Kinsman, member of Proud Boys” on October 21 last year. Despite its admitted neutrality, the instance was filed by Facebook under “praise or support for a designated Hate Entity.”

Controversial ‘hate monitor’ group the Southern Poverty Law Center describes the Proud Boys as an “extremist” and “hate”group known for “anti-Muslim and misogynistic” rhetoric. Contrary to initial media reports, it was not designated as“extremist” by the FBI last year.

Benjamin was also found to have run afoul of Facebook guidelines for posting a screenshot of a homophobic slur directed at himself, reposting a commenter’s anti-German rant with a seemingly neutral coment of his own, which Facebook considered support for a “statement of inferiority against Germans,” and a post mocking the ideology of ethnostate, which for some reason was flagged as promotion of the creation of an ethnostate by an overzealous Facebook censor.

Some of the content is marked as “borderline”, and most of the examples are suggested for deletion. Apart from “hate signals,” there are also notes that highlight controversial content by Benjamin, like aprovocative cartoon on Islam listed as “cartoon violence against vulnerable people” and a meme with Hitler.

Breitbart reported earlier that while the list includes some left-wing figures, it is mostly filled with right-wing personalities and also includes Tommy Robinson and Candace Owens.

Facebook, as well as its fellow social media giant Twitter, have been widening their apparent crackdown on non-establishment figures amid accusations of targeting predominantly right-wing users. Launched ahead of the US mid-term elections last October, it saw over 800 political pages being removed, sparking concerns of censorship and election interference.