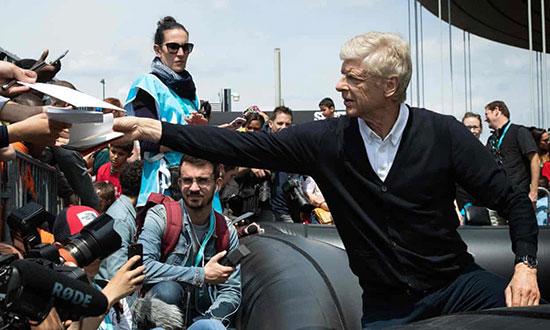 Arsène Wenger has described Arsenal’s predicament in heading to Baku for the Europa League final as “a little bit of a nightmare”. The club’s former manager, who left last summer after 22 years in the role and still describes himself as a fan, expressed disappointment that Henrikh Mkhitaryan, who signed for the club under Wenger, feels obliged not to travel because of safety concerns.

Armenians are not ordinarily welcome in Azerbaijan because of the dispute over the Nagorno-Karabakh region and Mkhitaryan has spoken of his hurt to miss such a showpiece occasion. “That’s something that should not happen in football, in the modern world, that politically you cannot play a football game,” Wenger said.

He also feels for the supporters who have abandoned hope of attending the final because travel, rather than tickets, has proved so expensive and complicated. It is an unusual situation for clubs of this stature and fanbase not to sell out their allocation for a final. Arsenal have sold 3,500 tickets and Chelsea 2,000. “The teams do not have such a problem, they live in ideal conditions, they have a private jet, they have nice business seats; it’s the fans,” Wenger said.

He will watch from the background, as he has for all of this season under Unai Emery, so as not to cast a shadow on his successor. “I support Arsenal and that will be forever. They are my club. I have given my life to this club but I managed quite well to focus on something different. I watch them like a fan. I don’t judge. I’m happy when they win and not happy when they don’t play well. But after that I try to really take a distance with it.”

Wenger, who has turned down several job offers, is ready to return to the game. “I will go back into football, for sure,” he said. “In what position I don’t know, whether that is as a manager or not. The appetite, the desire, is still there.

“Originally I said I want to manage straight away again. After that I thought maybe I take a little distance. I came to the conclusion that I want to share what I learned in my life. Because life is only useful if at some stage you share what you know. In what way will it be – will it be just winning football games or in another way – that’s what I have to decide.

“That decision will come very quickly. Football is still my passion; that’s the only thing I have a little bit of a feeling I know a little bit about.” He is currently lending his expertise to a new sports science device, PlayerMaker, which he believes is the most advanced development for measuring player performance and data.

Wenger admits to missing the involvement of running a team. “I do different things, with less intensity. But I have a better perspective of what is going on. I see the mistakes managers make and I don’t pay the price for it. I worked for 40 years in management. You cannot say you walk out and you don’t miss it. It’s normal. But when I miss it I focus on something different in life.”