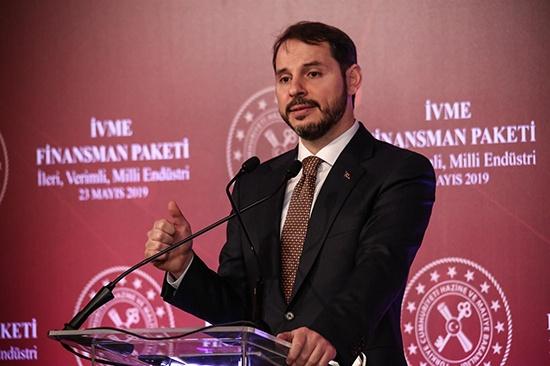 Turkey will provide a 30-billion-Turkish Lira ($4.9-billion) financing package for sectors which have export potential but are riddled with a foreign trade deficit and high import dependency, the finance minister said Thursday.

The package will prioritize medium-high-technology and high-technology products and sectors, the minister underlined, with the provision of raw material, intermediate goods, machinery and agriculture, he added.

He said that thanks to the policies implemented after 2002, the share of medium-high- and high-technology product exports in the country’s overall exports increased from 31 percent to 39.9 percent as of end of 2018.

According to the minister, the financing will be provided by three state-owned lenders, namely Ziraat, Vakıfbank and Halk Bank.

Albayrak stressed that those funds will be channeled to the sectors that will help to reduce the country’s foreign trade deficit.

The latest official data showed that Turkey’s foreign trade gap narrowed 67.4 percent on an annual basis to $6.8 billion in the first quarter of 2019. That came on top of the 63.7 percent decline in the foreign deficit.

As the rebalancing process in the economy continues, the country’s current account balance is expected to start posting a surplus from June, Albayrak said, adding that the New Economic Program, announced in September, targeted a current account shortfall of $26 billion for this year.

The minister noted that the economic activity, which slowed in the first quarter, has gathered momentum in the second quarter.

The worst is over on the employment front, according to the minister.

He noted that records from the social security institution, SGK, show that some 500,000 jobs have been created in March and April.

“As activities in industries, such as tourism, pick up during the summer season around 1 million jobs will have been created. Thus, the unemployment rate will decline to around 12 percent, 11 percent,” Albayrak said.