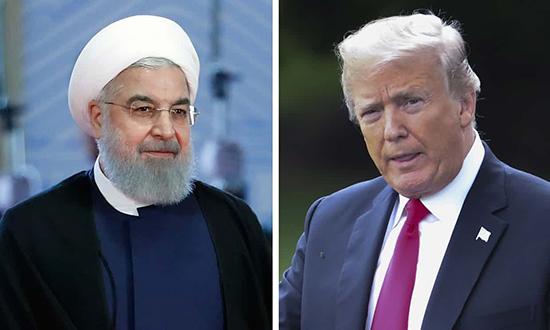 Iran will not surrender to pressure from the United States even if the country is bombed, Iranian President Hassan Rouhani has warned, amid weeks of heated rhetoric and hostility between Washington and Tehran.

Rouhani’s comments on Thursday came as the Pentagon confirmed it was considering whether to send additional American troops to the Middle East to respond to the tensions.

“We need resistance,” said Rouhani, as quoted by Iran’s state-run IRNA news agency and then reported by Reuters.

“So our enemies know that if they bomb our land, and if our children are martyred, wounded or taken as prisoners, we will not give up on our goals for the independence of our country and our pride.”

For his part, acting US Defence Secretary Patrick Shanahan said on Thursday that Washington was looking at options “to enhance force protection in the Middle East”, adding that one option “may involve sending additional troops”.

Earlier reports suggested that the US Department of Defense was planning to send 5,000 additional troops to the region. But Shanahan shot down the idea that a specific number of US forces was being considered.

Following Shanahan’s remarks, US President Donald Trump, asked by reporters about the plan, said he did not think additional troops would be needed, but that he was willing to consider it, Reuters reported

The rhetoric comes amid Trump’s “maximum pressure” campaign on Iran, which Washington has accused of posing an increased threat to American and allied forces in the region.

Last year, Trump pulled out of a 2015 nuclear deal between Iran and several world powers and reimposed US sanctions on key Iranian industries.

Recently, the Trump administration has applied even more pressure on Tehran, as the US seeks to cut Iran’s oil exports to zero and beef up the American military presence in the Gulf.

“More than one year after the imposition of these severe sanctions, our people have not bowed to pressures despite facing difficulties in their lives,” said Rouhani on Thursday, as reported by Reuters.

While the Trump administration has provided scant public evidence to back up its recent allegations of an increased Iranian threat, some senior advisers to the US president appear to be pushing for a military confrontation.

On Sunday, Trump tweeted: “If Iran wants to fight, that will be the official end of Iran. Never threaten the United States again!”

The US military has accelerated the deployment of a carrier strike group to the Middle East and sent bombers and Patriot missiles to the region earlier this month.

Meanwhile, also on Thursday, the chief of staff of the Iranian armed forces, Major General Mohammad Baqeri, warned that Iran will have a “hard, crushing and obliterating response” for any enemy “adventurism”, Reuters news agency reported.

Iran has also said it intends to pull out of parts of the 2015 nuclear deal that Washington withdrew from last year. It also recently urged European countries to protect it against US sanctions.

There has also been pushback in the US this week against the Trump administration’s policies towards Iran, as American lawmakers are seeking to ensure that the president cannot unilaterally declare war against Iran.